SAN DIEGO, California - The Wounded Warriors Project was at Cardiff Reef in San Diego, being honored on Veterans Day and trying to go out surfing, when a California State Parks Official attempted to shut the cause down citing that they needed a permit to be there. Did we mention this was ON Veteran’s Day?

The incident went viral after professional surfer, Joel Tudor, who was down helping at the event, posted this photo on his Instagram with the explicit caption (be warned of cursing): 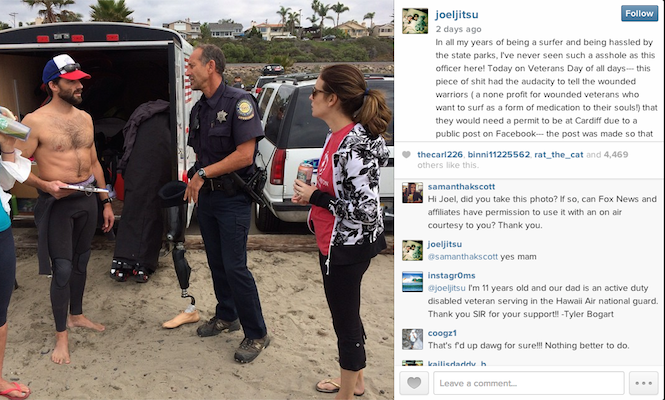 “In all my years of being a surfer and being hassled by the state parks, I've never seen such a asshole as this officer here! Today on Veterans Day of all days--- this piece of shit had the audacity to tell the wounded warriors ( a none [sic] profit for wounded veterans who want to surf as a form of medication to their souls!) that they would need a permit to be at Cardiff due to a public post on Facebook--- the post was made so that people could volunteer time and take a vet for a slide! Mind you that every vet there today had already payed [sic] the 15$ parking fee--- at one point as the wanna be cop was hassling the organizer.... A woman with no leg crawled through the dirt behind this guy to the waves.... Talk about zero sympathy or respect for his country and it's [sic] vets! Please repost this pic in hopes of this getting to this jerks [sic] boss! What a douche!"

Granted, the state official was just doing his job, but the action sports community has expressed quite an outrage after this post went viral. Even 11-time World Surfing Champion Kelly Slater commented on the matter saying, "Amazing what people will pull when they have a little authority and a bad attitude. I hope you guys just ignored him and pretended you all just happened to be there going for a surf! #HumansSuck but I hope the #WoundedWarriors still got a few waves. Please repost!"

Kelly Fogler, Southern California director of the Travis Manion Foundation, who was present when the incident took place, said the state ranger who approached the group was polite and low-key when he asked about the permit. Ultimately, the “ranger spoke with his supervisor and allowed our event to continue undeterred,” Fogler said Wednesday. “Honestly, he was just doing his job and he wasn’t confrontational, he was concerned.”

The state official said that because the event was posted on Facebook, it made it a public gathering, thus needing a permit. When a public gathering has over 25 participants, a permit is then required. At this event, there were around 50 people present. When all was said and done and after working things out on the beach with event organizers and state officials, the vets eventually were able to get in the water and have a good time.

Similarily, due to previous experiences with California State Parks during years past at the BOP, actions have resulted in a change of venues from Doheny State Beach to Salt Creek. Thoughout the years, state park officials have been very intransigent with the needs of the BOP, such as very particular with number of flags associated with each booth, certain types of equipment allowed being taken to the beach, height of the booths, etc, etc. That lack of flexibility to deal with the real time demands of the event and the incredibly high priced tag of the event, have been a part of the reason why the world's largest SUP event has moved locations from a state regulated venue to one thats run by the city.

What are your thoughts on the matter?