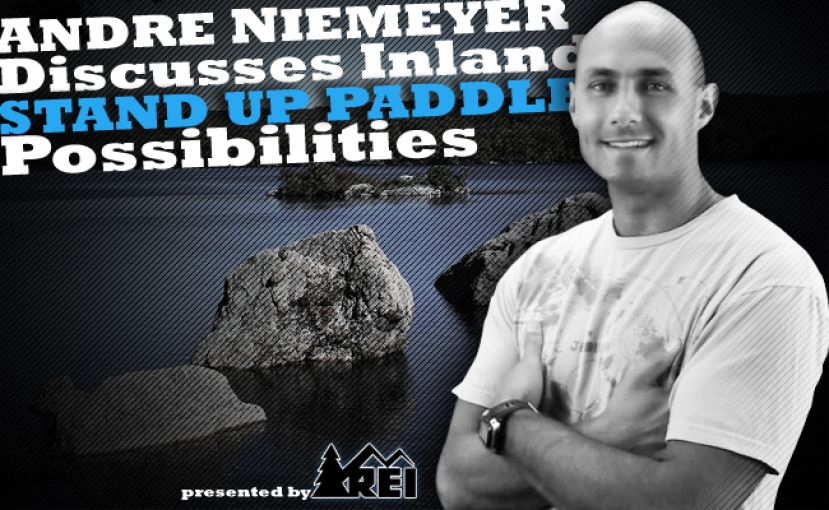 Andre Niemeyer (right) has discovered an entirely new water world and he shares some of his findings at REI taks.

ORANGE COUNTY, California – The modern recreational explosion of standup paddling has completely revolutionized the way in which everyone (and I mean, everyone!) can interact with bodies of water, wherever they may be found. Originally, in its most ancient of forms, standup paddling was simply an evolutionary step in the art of fishing, where paddling while standing gave the fisherman a better vantage point to spot and catch the day’s meal. Now forward several hundred years, if not millennia. Survival no longer depends (at least for most in the civilized world) on daily fishing or hunting adventures. Outdoor activities embody much more a recreational expression than a survival routine. In this new era, standup paddling, now detached from its most basic roots, has blossomed in myriad forms, from surfing and racing to white water and touring, just to name a few.

The versatility of the sport has carved a world of possibilities for those seeking the next adventure. Even coast-bound, surf “junkies” are now turning inland in search of some thrill. Andre Niemeyer, president of Sup Connect, is arguably one of them. “Since I’ve been about 2 years old, all I’ve ever known has basically been the ocean. Surfing, snorkeling, and you name it, I think I’ve done it all … all of it in the ocean,” says Niemeyer. “I dreaded every time our family had to go inland for some family re-union or whatever else was the reason. I was as ocean-bound as one can be.” That, however, drastically changed with standup paddling. After learning the sport from his good friend and sup pioneer Rick Thomas, he could not help but explore the many difference facets of standup paddling. In fact, Niemeyer has passionately taken sup to his share of inland waterways, exploiting the possibilities and testing the limits of the sport and himself.

Niemeyer will share many of his discoveries, as well as never before seen photos and footage of groundbreaking feats in some inland bodies of water. His personal experience, when coupled with what he has seen while covering the sport, has equipped him with a unique understanding of standup paddle inland possibilities. Join Niemeyer December 8th at the Tustin REI store and December 16th at the Huntington Beach REI store to learn about these possibilities. To find out more about the events, visit the events’ page on SupConnect.com, plus also reserve your seat for free on the store’s website.