Purely based on organic traffic and always working to give its audience the most value possible, Supconnect has set the record for organic growth on Facebook in the stand up paddle board industry in 2011, bringing over 6,000 people together to share the passion of paddleboarding, all of that in less than one year. 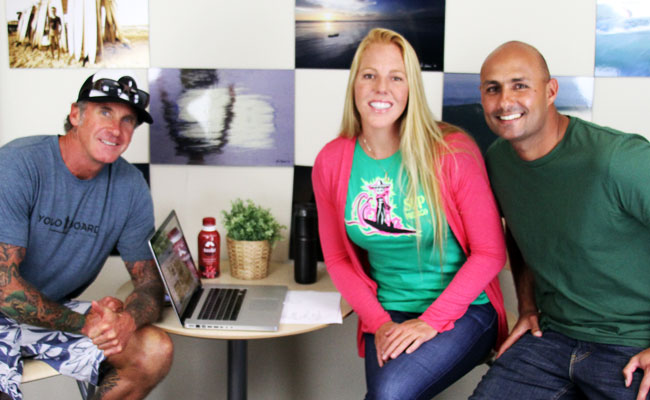 From left: EJ Johnson, Candice Appleby, and Andre Niemeyer after a broadcast of SUP TV Live, the Wake Up Sup Show.

SAN DIEGO, California – About less than a year ago, Supconnect did not exist on Facebook. At that point, the site was just a few days old and was yet to make its social media splash. Leveraging on the popularity of its parent website, Mylocallineup, which covered both surfing and stand up paddling, Supconnect went on to have not only the world’s highest web rank among paddle board websites but also to become a Facebook phenomenon within the stand up paddle board world. (Follow Supconnect on Facebook and Twitter for sup gems.)

Having up-to-date information, valuable content, and prompt engagement with its audience, Supconnect’s Facebook Page added over 6,000 fans in less than one year, all of which was purely based on organic and viral traffic. Whether considering stand up paddle board media, manufacturers, retailers, or athletes, no page has organically brought together so many people enthused about stand up paddle boarding, its lifestyle and community.

Thanks to the savvy of the folks at i9media (with all their online expertise), the commitment to the sport by the Supconnect crew, and the cheerfulness and all-inclusiveness of the members of the paddle board community, without whom none of which would have been possible. In retrospect, looking back to 2007 and even earlier, when some of the Supconnect crewmembers began covering paddle boarding, much has happened and there is certainly much more to come. But one thing is indisputable: the grand growth of the sport has only been possible due to its passion-driven ambassadors, athletes, enthusiasts, and supportive industry. And in that light, Supconnect feels honored to stand among such a crowd and look forward to yet another great year for the sport and its community. (Subscribe to our Youtube Channel for special sup clips.)

How important do you think is the stand up paddle community for the sport?