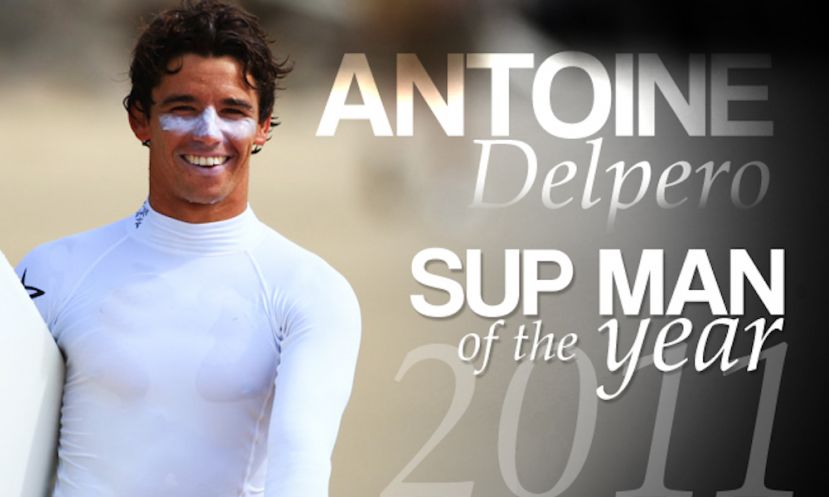 Your votes have been counted and we are proud to announce that Antoine Delpero has taken this year's SUP Man of the Year title. Read on to find out what other stand up paddle athletes made the podium.

Read about the SUP Man of the Year voting process.

SAN DIEGO, California - This year, the competition for the SUP Man of the Year was stacked. We had stand up paddle athletes from around the world competing for the coveted title. France, representing the vanguard of stand up paddle, showed up in a huge way with Antoine Delpero and Eric Terrien taking a massive chunk of the overall votes.

The waterman tradition-rich islands of Hawaii brought strong candidates to the table with such athletes as Dave Kalama, Bart de Zwart and Aaron Napoleon. California, Florida, Australia and Brazil all had a shot at the title.

In the end, after the field was separated, it was France, Hawaii and Brazil that all take their rightful places on the podium; France taking 1st and 3rd place, Hawaii taking 2nd and 4th place and Brazil taking 5th place.

After a fierce neck-and-neck battle with second place Bart de Zwart, Antoine Delpero squeezed the needed support out of his home country of France to win this year’s title of SUP Man of the Year. Hailing from Biarritz, Delpero honed his skills on a longboard before making the transition to stand up paddle.

In a sport that is unmistakably similar to longboarding, Delpero has been dominating the French stand up paddle circuit with a huge win recently at the Britany, France portion of the Stand Up World Tour. He rightfully takes his place as this year’s SUP Man of the Year and joins Chuck Patterson, the 2010 SUP Man of the Year, at the top of an extremely competitive field of professional stand up paddlers.

Fresh off a strong performance at the Triple Crown of Stand Up Paddle series in Hawaii, Bart de Zwart takes second place in this year’s SUP Man of the Year award. Originally from Holland, Bart has lived in Haiku, Maui for 11 years, where owns the Kahana Kai Maui surf shop.

Bart recently completed a 300-mile SUP journey from the Big Island to Kauai where he paddled, unsupported, for 5 days at sea to traverse the length of the Hawaiian island chain. Training with Connor Baxter and living in Hawaii sure didn’t hurt his chances at this year’s SUP Man title. In the end, Bart takes a much deserved 2nd place amongst a tough field of competitors.

After taking 6th place at the 15th annual Molokai 2 Oahu Paddleboard Championships in the stand up paddle division and logging an elite sub-5 hour time of 4 hours and 56 minutes, Eric Terrien scores the 3rd place spot in this year’s SUP Man competition. Probably one of the most recognized European SUP athletes, Terrien has been representing France in stand up paddle events around the world.

Travelling the world and seeing many different breaks has given Terrien a varied set of skills to use in any conditions he faces. Look for Eric to continue his success in SUP and to represent the excellent watermen coming out of France.

Kai Lenny grabs and impressive 4th place as the youngest candidate to be nominated for the SUP Man of the Year award. Lenny represents a new generation of stand up paddle athletes that is pushing the seasoned veterans to stay on top of their game. At only 18 years old, Kai is grabbing serious attention at SUP events around the world.

He won this year’s SUP world tour Sunset Beach Pro and also traveled to Antoine and Eric’s backyard to win the 2011 La Torche Pro SUP event in France. Competing against men twice his age, Kai is fast becoming one of the best stand up paddler surfers in the world and is current leading the pack in the Stand Up World Tour.

Leco Salazar takes the 5th place spot in this year’s competition. As the son of a Brazilian surf legend and 10 time longboard champion, Leco is making a name for himself in SUP by ripping up events around the world. On the Stand Up World Tour circuit, Salazar has taken home 2nd place at the La Torche Pro in Brittany, France, and 5th place at the Sunset Pro in Hawaii. Almost halfway through the events, Salazar is poised in 6th place overall and can easily make a run for first place when the tour wraps up in Hawaii at the end of November.

Thanks to all of the candidates in this year’s SUP Man of the Year awards and thank you to all the SUP Connecters who placed their votes for their favorite SUP Man.

Remember to vote for your favorite SUP Woman in the next round of voting.