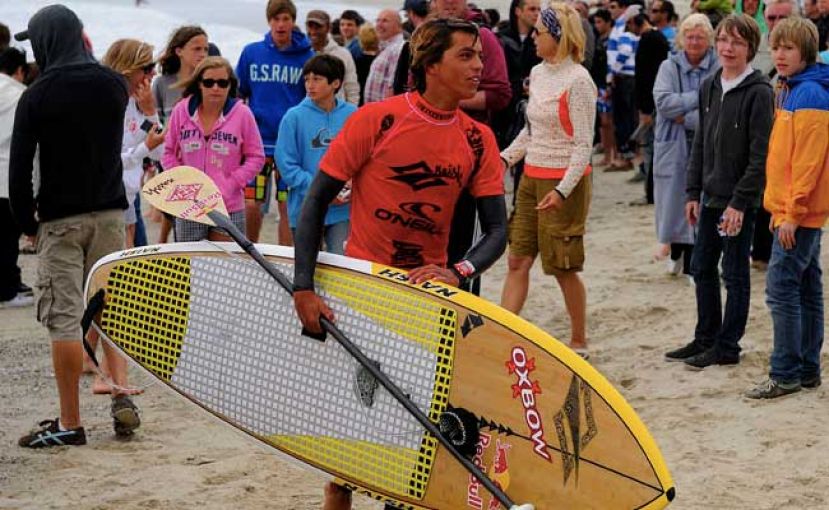 The Stand Up Paddle World Surf Tour in France witnessed yet another outstanding performance by Maui all-star, Kai Lenny, who faced one of his fiercest rivals in the final, local Frenchman, Antoine Delpero.

Thus far, Kai Lenny has won both legs of the Stand Up Paddle Surf World Tour, winning the Sunset event this year in incredibly high surf and following up his feat with a win in France in more manageable conditions. Following close behind are Leco Salazar and Antoine Delpero, who also earned considerable points during the Sunset event. But in this early of a game, the field is still fairly open, with Kai Lenny having a considerable lead due to his consecutive wins, during the first two legs of the event.

Next, all the eyes are turned to Tahiti, where the sup surf tour will showcase some of the world’s best talents in one of the most favorable conditions to boost performance. With a healthy combination of hollow barrels and maneuverable faces, the Tahitian stop, much like last year, promises to present some jaw-dropping barrels, wipeouts, and turns, while lining up points for the eventual crowning of the next stand up paddle surf world champion. With the steep take off and tight faces, Kai Lenny in his progressive style will likely have much to profit, but heavier and more powerful surfers are likely to offer some steep competition, including Dave Muir, winner of last year’s Tahitian event.

What do you think of the Stand Up Paddle Surf World Tour and its pool of athletes?

More in this category: « The Shouses, a Paddleboard Love Story Fleeing the Top Spots for Better Sessions »