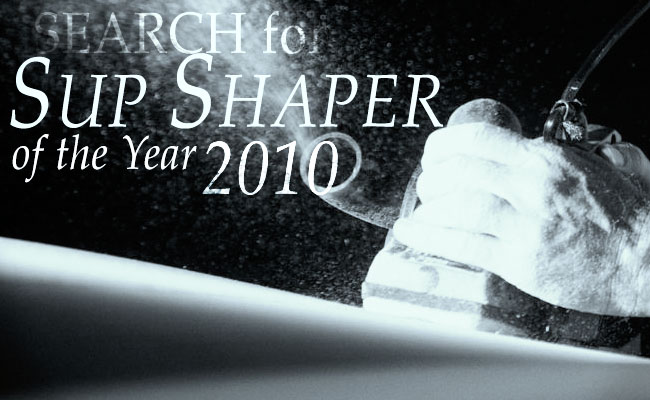 Shaper mowing down the blank to add the fine design features that partly ensure the joy of stand up paddle boarding.

SAN DIEGO, California – As we continue to look for some of the most popular and influential figures of the stand up paddle world, it’s now time to find the Stand Up Paddle Shaper of the Year 2010. If you have someone whom you think should be nominated, please join the SUP Shaper group on Supconnect.com and submit your nomination. Nominations can also be made on the Supconnect Facebook Page by posting the shaper’s name and reason why you think he should be nominated.

When considering the top contenders for the title, we’ll be taking into account the shaper’s popularity in terms of the feedback we receive on his nomination. There will be no ‘up or down’ votes. Rather, public support for the shaper will be measured by the number of Likes and Comments on the Supconnect Facebook Page, plus also posts on the SUP Shaper group on Supconnect.com and Twitter Feedback via @supconnect

After all the ‘votes’ get counted, we’ll look at the top nominations and examine the individual track record of the shapers to confirm whether he has in fact made a substantive contribution to the realm of stand up paddle board design. Other things being equal, this process will not change the popularity outcome. Instead, it’s merely designed to ensure that the winner of the title “Sup Shaper of the Year” has in fact made some remarkable contribution to the craft of shaping stand up paddle boards.