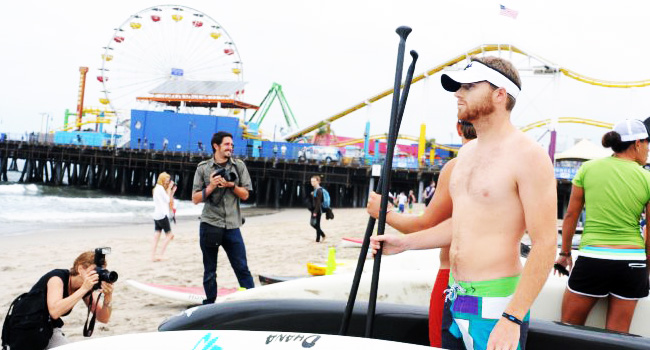 Santa Monica -- Restoring a decades-old tradition, the world famous Santa Monica Pier and the Honolua Surf Co. will kick off the summer of 2010 with the Santa Monica Pier Paddleboard Race, a dory competition and a paddle gear exhibition, on Saturday, June 12.

“Santa Monica and the pier in particular have a rich history of paddle boarding and we’re thrilled to be bringing back that tradition and tapping into the growing popularity of stand up paddling,” said Pat Fraley, brand manager at Honolua Surf Co. which is presenting the event. “This will be a great day at the beach and the pier for anyone who enjoys the ocean or a good competition.” Paddleboard racing was a popular Santa Monica sport in the 1940s with two paddleboard clubs headquartered on the pier and race results regularly published in the local newspaper. The sport’s popularity waned over the decades, but has recently made a dramatic resurgence.

Santa Monica-based Heal the Bay and its public marine education facility, the Santa Monica Pier Aquarium, will receive a portion of gross proceeds from the paddleboard race. "Heal the Bay is excited to be a part of this wonderful ocean event. Not only will a portion of the proceeds support our efforts to make Southern California coastal waters and watersheds, safe, healthy and clean, but it also promotes greater awareness of, and deeper connections with, the Santa Monica Bay," said Natalie Burdick, Heal the Bay’s constituent development manager.

The start and finish of the races will take place on the sand immediately adjacent to the pier with the course running north and south in the heart of the Santa Monica Bay. The stand up paddle and prone paddleboard races feature 5.5 mile and 1 mile courses, both of which take paddlers by the historic Santa Monica Pier, visited by an estimated 4 million people each year. “The pier is a world-class venue for an ocean event and restoring the paddleboard tradition to Santa Monica is awesome,” said Todd Roberts of ZJ Boarding House, which is helping to organize the event. “We are expecting everyone from some serious competitors to first-time racers who are just out to have fun and be a part of fantastic day at the beach.”

For the dory competition, area lifeguards will row fiberglass rescue boats in both a 1 mile sprint and a crowd-pleasing 3 lap race through the surf zone. On the pier deck, manufacturers will show off the latest in paddleboards, accessories and clothing. An awards ceremony will follow the completion of the races for the top finishers in each of the divisions. Event partners and major sponsors include: Honolua Surf Co, Heal the Bay, ZJ Boarding House, Positive Existence, Santa Monica Daily Press, Hawaiian Tropic®, Coreban, Joe Bark, Scott Anderson, Surftech, C4 and National Doryman’s Association. Participation in the race is limited and early registration is encouraged. The first race begins at 8:45 AM, June 12, 2010.  For more information visit the Pier Paddle website.

About Honolua Surf Co.:
"L'Esprit et le Coeur en Harmonie" or "Mind and Heart in Harmony" is the spirit of aloha and the foundation that the Honolua Surf Co. was founded on. Celebrating the lifestyle of the island waterman - Honolua is focused on the person who has built a life centered on the ocean and all it has to offer. Honolua was named after the mystical bay found on the Hawaiian Island of Maui's western shore.  One of the most perfect waves in the world breaks along the point, ending in the crystal blue waters of the bay where an abundance of sea life lives in tranquility.  The islands are also home to one of the largest populations of waterman in the world because of the wide variety of conditions they have to offer.  Whether it's canoeing, paddling the inter island straits,  tow in surfing at an obscure outer reef or paddling out to off shore perfection,  the islands offer the waterman a daily opportunity of being in the ocean.

About Heal the Bay:
Heal the Bay is dedicated to making Southern California's coastal waters and watersheds, including Santa Monica Bay, safe, healthy and clean. It uses research, education, community action and advocacy through programs such as the Beach Report Card®, the Santa Monica Pier Aquarium, and Coastal Cleanup Day.