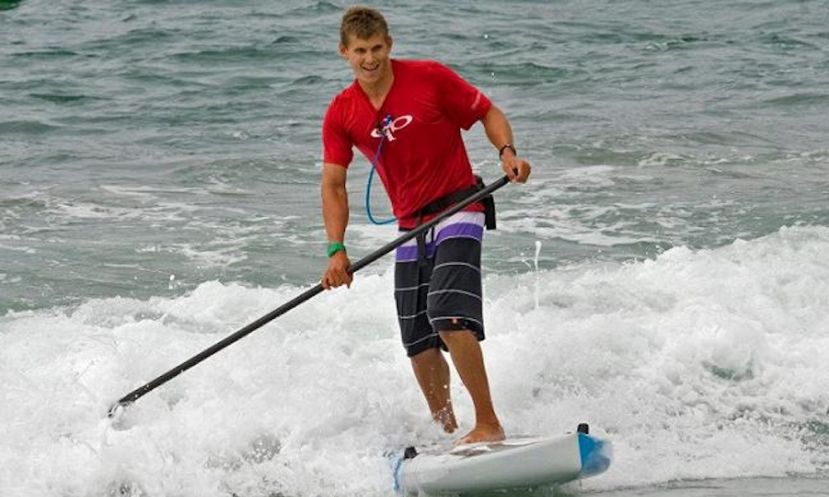 Jamie Mitchell is one of the most advanced ocean athletes of our day.

After one month of open nomination and a second month of voting Jamie Mitchell has taken this year's SUP Man of the Year title.

SAN DIEGO, California - This year, the competition for the SUP Man of the Year was conducted in two separate phases. ·The first was an open nominations process where anyone could be nominated to become the next SUP man of the year. ·The second phase involved a month of voting on pre-seeded athletes along with the top nominees from the first phase. ·In the end, it was Jamie Mitchell who came out on top in a very deep field of incredible athletes, tremendous ambassadors, incredible individual involvement and massively supported men from the sup community.

Jamie Mitchell is one of the most advanced ocean athletes of our day. ·He is originally from Australia but travels the world and can no doubt call many places his home. ·In some circles he is best known for his·10 consecutive Molokai to Oahu Ocean paddling championship wins.  However, the stand up paddle community also recognizes his phenomenal achievements in SUP racing and surfing as well as commends his tremendous involvement in the sport.

Just this year Jamie introduced the "Survivor SUP" style of racing at the Waikiki Paddle Festival.··This was a sanctioned WPA World Qualifer Event and was intended to really bring out the skill, fitness level and talent of the athletes. Jamie also wanted the race to be especially spectator friendly so that as many people as possible could be involved and see the paddlers in action.··After a successful event his goals were accomplished and those who attended seemed to have a fantastic experience.

Along with spreading the stoke with his new racing ideas, Jamie has also had tremendous involvement and participation this year in the SUP racing circuit. ·He even went so far as to travel to the Outdoor Retalier Summer Market where he actually missed the Molokai to Oahu paddleboard race and dedicated himslef to some SUP racing in the mountains of Utah.

Jamie's list of accomplishments is very long and he is well deserving of this coveted 2012 title of Supconnect SUP Man of the Year. Many of his 2012 SUP results are listed below.

Winner,·Waterman of the Year, Australian Surfing Hall of Fame

Jamie Mitchell and all Supconnect Award winners are always chosen based on the criteria seen below.

1. Ambassadorship:··Conveying the cheerfulness and inclusiveness characteristic of the sport.

2. Involvement:··Attending events and gatherings, having a finger on the pulse of the sport.

3. Performance:··Showing proficiency in the sport, though top results are not a requirement.

4. Support:··Having a following and votes to show you have some support to validate your credibility.

Remember to vote for your favorite SUP Grom in the current final round of voting.