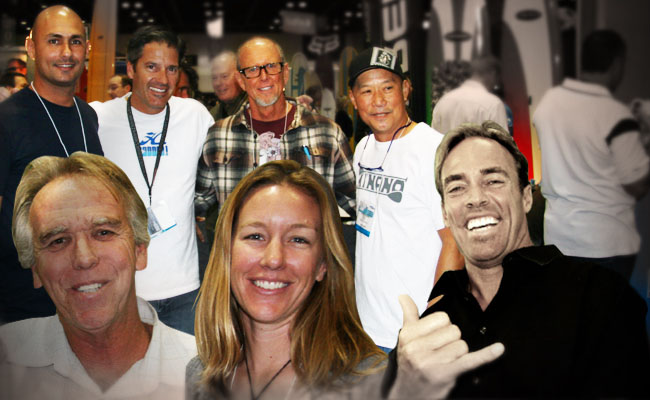 ORLANDO, Florida – When SUP Business set out to hold the second informal “roundtable meeting” for the stand up paddle industry, they expected some interest but nothing like the throngs of people that turned out for the SUP Business gathering at the Surf Expo. During the Battle of the Paddle, Dana Point 2010, Holcomb and Muir held an informal roundtable meeting with key industry players at an inconspicuous restaurant in Orange County, California. Forward a few months and the objective, turnout, venue, and invitation for the sup industry meeting were quite different. (Join the Industry Wire group.)

To begin, the invitation this time was an open one, unlike last time’s targeted approach. The idea was to use the occasion of the Surf Expo in Orlando, Florida to draw as much involvement as possible and to help members of the stand up paddle industry to feel just as welcome to the community as the layman participants of the sport. So, off went the online open invitation to the inboxes of the industry players. And as quite often is the case with interesting emails that hit our desktops, the invitation got forwarded to other industry members and so it went, traveling the cyber world with the inclusive spirit with which it was intended. (See photos from the Surf Expo 2011 in Orlando, Florida.)

On another note there was the change of venue. Unlike the inconspicuous restaurant in which the previous meeting had been held, the conference hall where the last sup industry meeting was held was anything but that. The tall ceiling, projector screen, microphone system, and the long lines of seats around the table and along the walls set the tone for a new and vigorous era for the stand up paddle world. Now prior to the sup industry summit, none of the organizers were fully convinced that the venue would be fully utilized. But within just a few minutes before the meeting was scheduled to start, the opposite concern began to emerge. The question was, “Will there be enough room?” Unfortunately, the answer was “no.” Some were turned away for they weren’t able to get into the conference hall, signaling the enormous interest to participate in this blossoming industry. (Signup for the Supconnect Newsletter.)

While sup industry members made their way into the conference hall, the panelists for the night were getting ready to take the floor. Here was the lineup. Royce Cansler (Director of Retail Relations at Billabong) was on tap to give the outsider’s take on the sup industry’s sweep across the country and its impact on surf shops. Scott Ruble (Owner of Covewater Paddle Surf in Santa Cruz) was ready to float the idea of negotiating shipment costs collectively as an industry to get better rates. Jeff Alter (Owner of Hobie) – who had to replace his Sales Manager, Designer, and Shaper, Mark Johnson, due to some last minute family emergency – had some thoughts to share on the ever-present tug of war between manufacturing costs and profitable margins. Ty Zullim (National Sales Manager of Surftech) had in mind the commitment to quality materials and long-term customer satisfaction. Dave Chun (Owner of Kialoa) was on tap to share his insights into the role of quality product, consumer satisfaction, and their relation to market sustainability. And lastly, Andre Niemeyer (Executive Director of My Local Lineup Media Corporation) was on the books to present what has become the world’s highest ranked stand up paddle website, SupConnect.com, and how its platform is changing the way stand up paddlers interact with information and one another around the world. With occasional Q&A intervals, plus a few remarks about life jackets (probably more than anyone was ready to hear), the night went just as planned. (Become friends with Mike Muir, Jennifer Holcomb, Chuck Patterson, and Andre Niemeyer on Supconnect.)

Lastly, after Niemeyer was done with his presentation of SupConnect.com, he turned to a broader announcement about the launching of an industry association. For several months, Niemeyer, Jennifer Holcomb, Mike Muir, and Chuck Patterson have been working with various different industry groups to launch a stand up paddle industry association. After garnering enough support and cohesion for the launch, the group made the decision to use the industry summit at the Surf Expo to announce that an industry organization was already in the works, with the intent of serving as a vehicle to protect and support the various interests of the stand up paddle industry and ensure a strong and sustained growth for the sport. On that final note, Holcomb took the stage, thanked everyone for their participation, and joined the crowd to answer questions about her SUP Business publication, the roundtable meeting, and the industry association. The participants were highly supportive and appreciative for the discussions and announcements, and many offered to help with the rollout and management of the stand up paddle industry association. (Signup for the Supconnect Newsletter.)