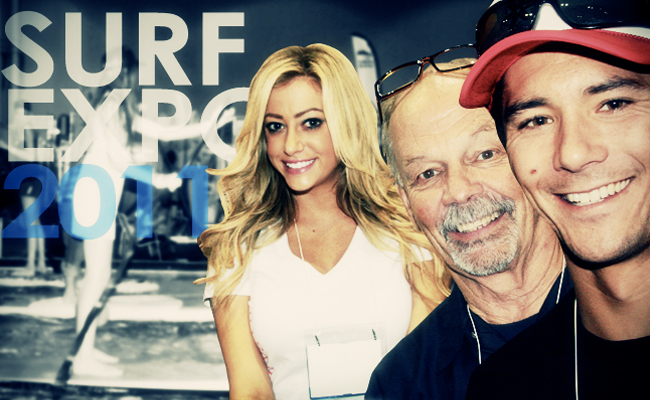 ORLANDO, Florida – With the demise of the Action Sports Retail Expo (ASR), the Surf Expo has solidified itself even further as the winter gathering for the action sports industry, shifting the industry gathering heavily toward the east coast. The Stand Up Paddle (SUP) Industry is no exception. Putting aside the Outdoor Retailer Summer Expo in Utah, the sup industry has claimed the Surf Expo its winter destination, at least for now. (See all the photos from the Surf Expo 2011.)

The days of a few stand up paddle booths lost in a sea of strictly surf brands are long gone. People like Todd Bradley (C4 Waterman), Mike Fox and Bob Rief (Boardworks), and Dave Chun (Kialoa) once held their ground in highly foreign terrain, like Boardworks/C4 Waterman’s attendance at the ASR 2007 and Kialoa’s at an early OR show. Their precursory endeavors paved the way for some drastic changes. During this year’s Surf Expo, held from January 6th through 8th at the Orange County Convention Center in Orlando, Florida, the sup industry demarcated its grounds. In fact, according to Surf Expo’s website, there were 110 booths categorized as stand up paddle manufacturers. Some of those were not strictly stand up paddle companies. But nonetheless, a simple walk down the aisles was enough to convince anyone of the sup industry’s large turn out. (Join the Industry Wire group on Sup Connect.)

Now although the sup industry showed up in full force, the foot traffic was down according to some. Several manufacturers commented that last year’s event had a bigger turnout in terms of participants. That seemed to be a common remark among suppliers. When asked ‘why,’ all noted that this year’s Surf Expo was held too close to New Year’s whereas last year’s event was held a few weeks later in the month. Nevertheless, when asked whether the show was good for business, the unequivocal answer was ‘yes.’ That shows that, despite of the drop in foot traffic, the demand for stand up paddle products is still on the rise. (Signup for the Newsletter from Sup Connect.)

Yet another change was the sup demo pool, located at the heart of the stand up paddle booths. Last year, exhibitors had to purchase pool time. As a result, companies got creative in terms of how to use that time productively. Lots of activity was seen in the ‘water.’ This year, however, the pool was a free for all. One would think that the decision would boost pool activity, but not so. If it wasn’t for Robert Stehlik’s tug of war on stand up paddle boards, the water would have been there only for aesthetics. Surf Expo has indicated that next year there will not be a pool, much to the exhibitor’s dismay. Although the pool wasn’t used as much, companies expressed a unison objection to its removal, with some even willing to go back to the pay-per-use model rather than giving it up all together. If the changes of this year’s expo are any indication of what’s to come, one thing is clear. Whatever the changes may be, there will be tons of changes to talk about. (See all the photos from the Surf Expo 2011.)