Playa Zicatela is known for its voracious appetite for surfers and their boards. Stand up paddle surfers do battle with this hungry wave at this year's Central Surf Pro and FCS team rider Sean Poynter comes up with the victory. 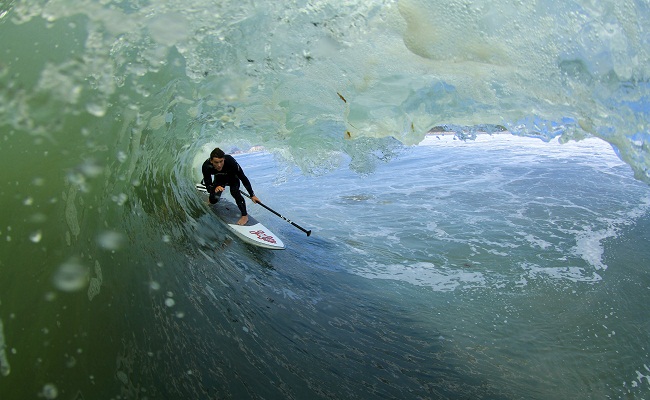 Known for its bone-crunching barrels and tricep-shredding rip currents, Playa Zicatela provided some great waves for the stand up paddle surfers during the three days of competition.

Riding an FCS Simon Quad fin set up, Poynter says, “Since Puerto's such a steep wave and the board’s big too, the more hold in the wave face the better, so quad was the ideal set up. The Simon are also big fins that help with that.”

Poynter goes on to say, “What meant the winning difference with these fins though was the 50/50 foil in the back fins which provided driving in the barrel a little more control. These fins were definitely a big factor in making barrels.”

The final day of the Central Surf Pro saw more size and consistency in the surf, with waves reaching 6 – 10 feet. After two semi-final heats, Sean Poynter, Drew Brophy, Jesse Ledy and Carlos Bahia advanced to the final round.

Facing some tough competition, Poynter used the same strategy that got him to the final, sitting on the corner rights and waiting to pick off the better waves. “Like it had worked in the previous heats, the rights were offering up a more pronounced barrel than the lefts, the only drawback was the rights were not as consistent as the left barrels, and they were quick,” said Poynter.

In the end, Poynter’s strategy and skills in the heavy surf paid off with a big victory, taking first place in the Central Surf Pro.

For a complete list of results and pictures of the event, go to www.centralsurfpro.com.

FCS produces a complete line of the most innovative SUP fins and accessories on the market. First introduced to the Australian market in 1992, FCS has revolutionized the surfboard industry with removable surfboard fins. Removable fins make traveling easier, allow surfers to change their fin setup to suit varying conditions, and more importantly, give them the opportunity to change the performance of their surfboard simply by using a different fin template.

Today, after years of improved strength and performance through extensive research and development, 28 ASP World Titles and countless events have been won riding FCS. Standing on the shoulders of the success in surfboard fins, FCS has launched a line of stand up paddleboard fins that are optimized for a variety of SUP mediums including: racing, touring and surf.