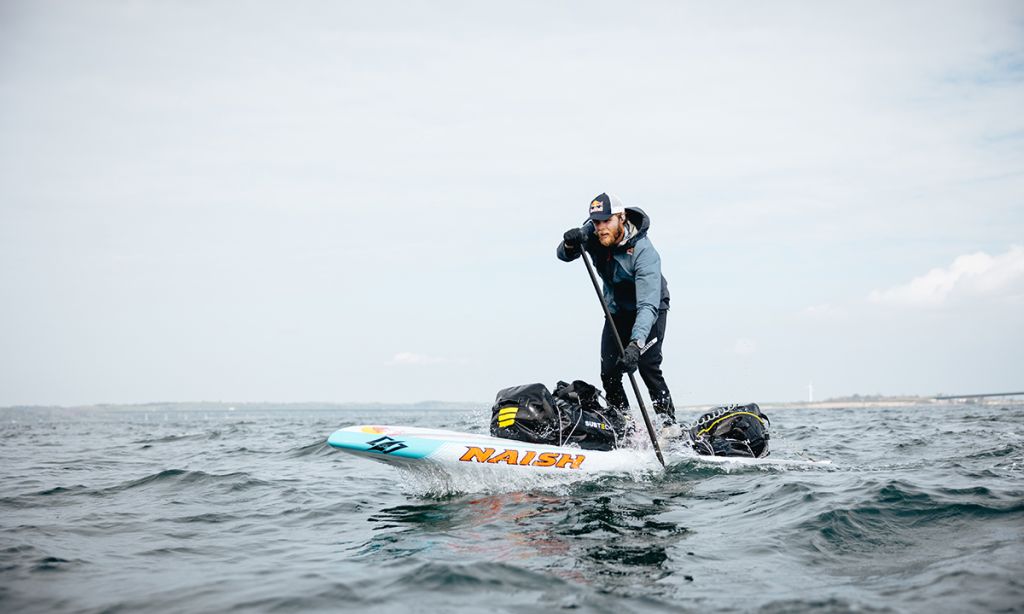 Casper Steinfath on his way to becoming the first-ever to circumnavigate Denmark on a SUP. | Red Bull Medie House / Kasper Bøttern

KLITMØLLER, Denmark - If all goes as planned, Casper Steinfath will end his 1450 km trip around Denmark Wednesday afternoon local time. The final for Casper Steinfath's Great Danish Paddle will be dramatic and memorable with heavy 16-knots-tale wind and lots of fun waves to surf. He will be the first to circumnavigate Denmark on a standup paddle board. The final stretch is a 70K long stage to Klitmøller.

The stage is the third-longest stage of the adventure. Only the crossing from Aarhus to Sealand and a crossing down south were a bit longer. He is under tremendous pressure to get home before dark because a heavier storm, directly from the west, is knocking on the door on Thursday. The coming semi-storm will keep him on land for at least five days. IN other words: He's in a hurry.

"It's going to be a crazy culmination of a crazy project. I have to deal with a heavy tailwind, waves, ferries, and many piers along the Western coastline of Jutland. But I give all I've got," Casper says.

It wasn't part of the plan that the final leg should be like a long, challenging mountain stage from The Tour de France. According to plan, he should be in Vorupør, a few kilometers from Klitmøller, to make it easy for Casper & Friends to do a champagne stage at the final stretch. But the very long days since the border between Denmark and Germany is hitting him hard - physical and mentally.

"I'm done like an old wreck. The last couple of days have been adamant, but with the optimistic forecast for Wednesday, I took a rest day to recover and recharge batteries for the last time," Steinfath noted.

Casper sets off in Fjaltring early morning Wednesday and hopes to join the party at the local club around 6 pm. You can follow him here via Trac Trac.