The Battle of the Paddle (BOP) California, organized by Rainbow Sandals, still reigns supremely as the world’s largest stand up paddle event, with 985 participants on hand in 2011. 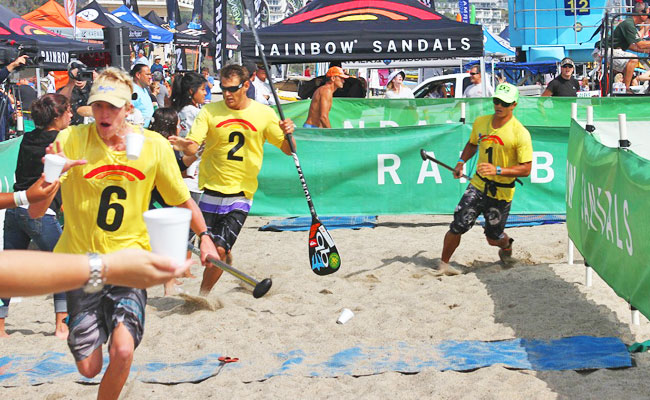 DANA POINT, California – When Sparky, Gerry Lopez, Pat Huber, and Barrett Tester decided to hold the first Battle of the Paddle (BOP) California back in 2008, they had no idea that their event would one day become the world’s largest stand up paddle gathering around. With 985 participants last year, the Battle of the Paddle has become the Mecca for stand up paddlers of all stripes and from everywhere.

Southern California has been spawning the global growth of stand up paddlers since the sport has begun to gain momentum a few years ago. And the Battle of the Paddle California has been one of the principal engines behind that growth. The international convergence of athletes, the spectator-friendly format, and the high-caliber of racers all coalesce into the greatest stand up paddle spectacle around.

And the team behind the BOP couldn’t be more enthusiastic about the sport. Sparky, an avid stand up paddler and owner of Rainbow Sandals, assembled a crew highly passionate about stand up paddling. Gerry Lopez, the surfing legend also known as Mr. Pipeline, has become a wholehearted sup devotee and the mind behind the format of the event. The surfing legend has participated in numerous stand up paddle races and continues to be a phenomenon in the sport. Pat Huber, Rainbow Sandals’ marketing director, is an incredibly powerful sup surfer and a strong paddler in his own right. Barrett Tester, a professional event organizer with a long history in the watersports world, brings his jovial attitude and logistical expertise to the table. And all their work together, plus the unmatched cheerfulness and energy of the sup community, helps make the Battle of the Paddle the largest gathering for the sup world.