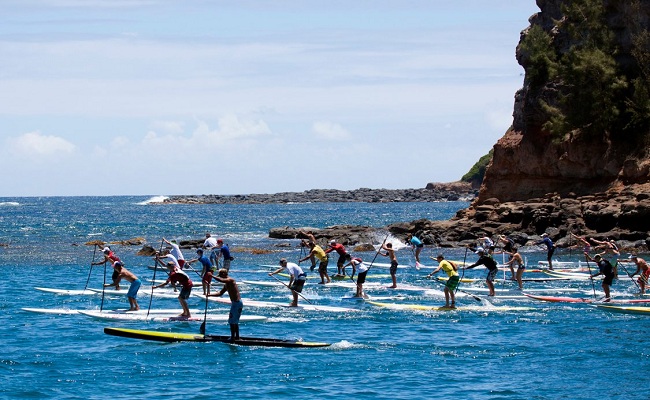 Post pictures from this stand up paddle race and others.

KAHULUI, Hawaii – The first race of the Triple Crown of Stand Up Paddle 2011 was held this past weekend. The Handsome Bugga Poi Bowl saw over 60 competitors battle for 9.54 miles from Maliko Gulch to Kahului Harbor.

“The race started inside of Maliko Bay between two buoys. I started towards the left side of the bay.  When I got outside of the bay, I was in second place behind Jerry Bess. Within 5 minutes of being in the bumps, I passed him up and I was in the lead.”

“I just put my head down and focused on one thing and that was wining. I looked back to see my competition a few times, but I stayed focused and kept catching bumps. The trade winds were light to moderate, but still was super fun and I got some good long glides."

“When I came around the outside of Kahului Harbor I was still in first. I had a good lead on second and third place – Livio Menelau and Mark Raaphorst. So, all I had to do was keep my pace coming into the harbor to the finish line at the beach. At the finish there were a lot of people hooting and hollering for my first place finish!”

About the Triple Crown of Stand Up Paddle 2011

For more information on the Triple Crown of Stand Up Paddle 2011 check out the event’s website.

Tell us about a SUP race you are planning to compete in.