Awards
updated 8:00 AM PST, Mar 9, 2021
Headlines:
The Best Tech For Recording Your SUP Adv: Research shows that taking photos decrea
Red Paddle Co Launches Cutting-Edge Bran: The world’s leading inflatable paddle bo
How to Start Camping With Your Paddle Bo: SUP camping is becoming more popular, an
Exploring Wanning, China: Wanning on the eastern coast of Hainan I
How To Train for When SUP Racing Returns: As our world starts to come back togethe
Weekly Recap 3/2/2021: Welcome to the Supconnect Weekly Recap,
The Common Misconception of Stance: Recently while at the beach and during r
What Are the Mental Health Benefits of S: One major reason that so many individual
Paddle Logger Shortlisted for the 2021 S: Paddle Logger, a multi-award winning mob
Paddle Boarding Israel: I bet you never thought of Israel as a g

This year's "festivities" started late Wednesday as the teams from Hobie, Bark and SIC rolled into town and posted up at the Carolina Paddleboard Company. Boards were unpacked, old friendships were reignited, food and drink were shared, and plans were made.

The prone element of the sport has really blown up in North Carolina over the last couple of years. Joe Bark been very supportive and encouraged local waterman like Brad Howard to build the sport in this area. As a result of this growth, Joe and Jack Bark held a prone clinic at Carolina Paddleboard's water front location on Thursday. This clinic was well attended with over 20 participants and spectators. 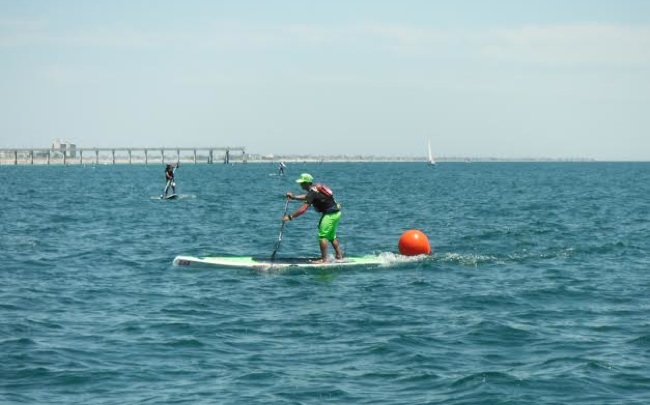 The Hobie Team took advantage of a small swell on Thursday with a mid day surf session on Masonboro Island. Team Riders Colin McPhillips, Byron Kurt, Jay Wild and myself headed over with Hobie Manager Sean Douglas and Infiniti Team Rider Chris Hill. The fun little waist high swell gave us all a chance to catch up and relax before the weekend officially kicked off. Sean manned the camera and we all took a few minutes on the beach to watch as Colin ripped up one of the premier surf breaks on the East Coast. A boat tour of the course after the surf session gave Carolina Cup first timer Jay Wild an opportunity to see what was in store for him on race day.

Friday was demo day; the biggest day for retailers at the Carolina Cup. Almost every major industry manufacturer was in attendance with over 30 venders on site this weekend. By day's end several hundred new clients had taken advantage of the opportunity to try the latest and greatest equipment for 2014. The Jamie Mitchell paddle clinic also took place on Friday as a result of the sport's growth in the area. After land based instruction on technique, the paddlers headed out into Banks Channel for some "hands on" training. 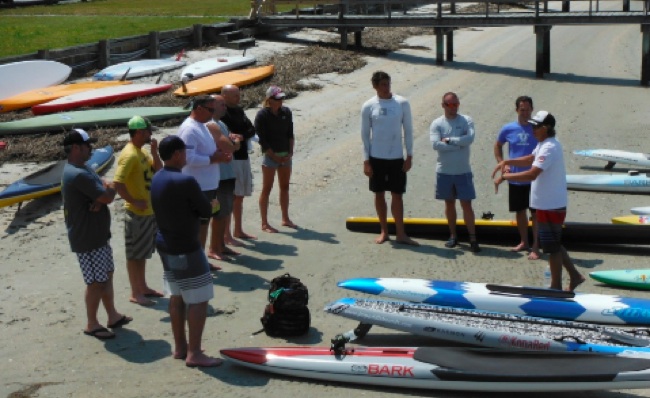 Demo day was wrapped with a fitting tribute to Bob Risener. A paddleout took place late Friday afternoon with more than 100 paddlers descending on Crab Island. Stories were shared and Bob's family was in attendance. The Risener's presence at the Carolina Cup, since its inception, helped us establish the incredibly welcoming vibe that defines this event. By the end of Demo Day several hundred people had tried out the newest products in the SUP world and more than 700 racers had signed up to participate in Saturday's Race. Once again establishing the Carolina Cup as more than a race, it's the East Coast's biggest paddle event, and one helluva way to kick off the season. 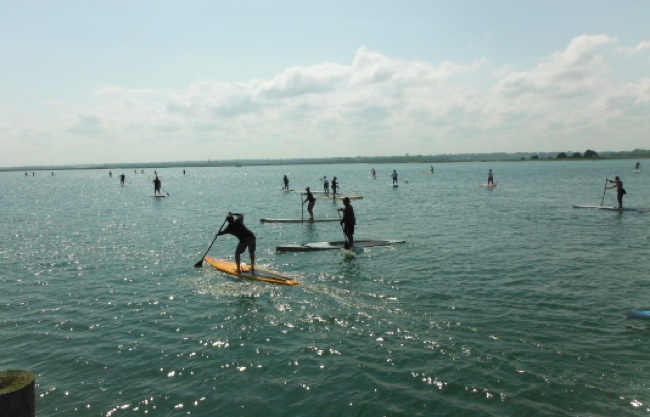 After being part of a 10-12 man pack for the first 10 miles, Danny broke free outside of Mason's Inlet and pulled away from Georges Cronsteadt and Travis Grant for his 3rd Carolina Cup Victory. Chase Kosterlitz, Jaime Mitchell and Matt Becker rounded out the Top 6. 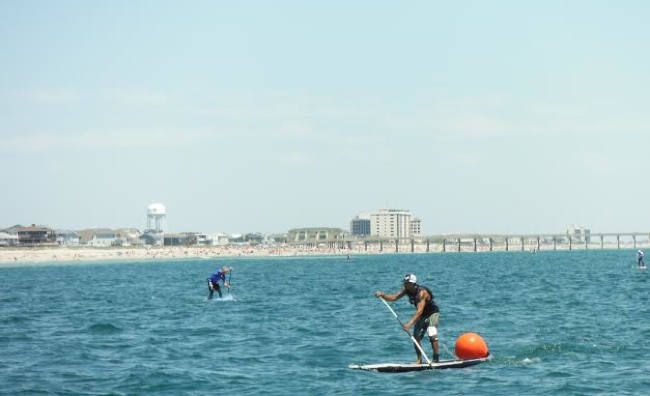 Annabel Anderson continued her winning ways at The Carolina Coast, claiming 2 in a row at the Carolina Cup! Jenny Kalmbach, Liuna Augaitas, Sonni Honscheid,Kelsa Gabehart and Brandi Baksic closed out the Top 6.

WRIGHTSVILLE BEACH, North Carolina - The 2014 Carolina Cup brought its famous mix of racing, clinics, demos and SUP community building again. Here to give us the full recap of the weekend, is Carolina Cup founding member and Supconnect contributor, Haywood Newkirk:

"Sporty conditions" were the rule of the day. After a "favorable" 2 mile downwind section, these professional athletes had to overcome an 8 mile upwind/upcurrent flatwater leg followed by a "side to" 3 mile ocean sprint to the finish. A top 20 finish in these " Carolina Conditions" were well earned.

Click here to see the full results from the 2014 Carolina Cup. 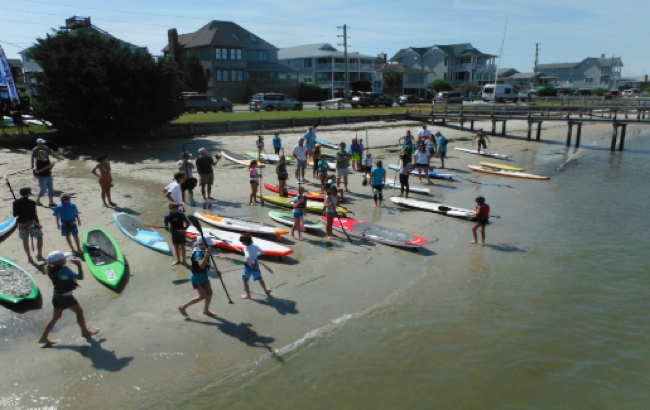 The final day of this event wrapped up under beautiful Carolina Blue skies, light winds and temperatures in the high 70's. This day is all about the kids, relaxing with old friends and making plans for 2014.

Bailey Rosen held her kids clinic with over 20 participants ranging in age from 5-15. Bailey provided these young paddlers with paddle techniques and race strategies. The clinic began with on land instruction followed by water demonstrations and drills. The new skills the kids learned from Bailey became immediately evident in the Kids race that followed. 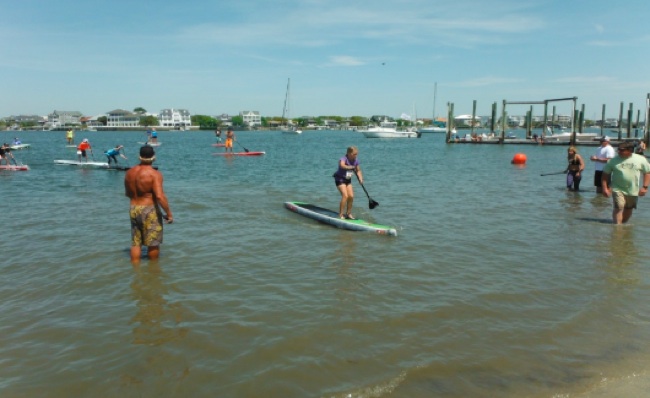 The kids race was broken down into 3 separate races this year because of the tremendous growth of youth paddling in this area. Races for 8 and under, 9-11 and 12 and over all took place with more than 60 competitors participating and over 100 rowdy spectators cheering them on to victory.

The final day was wrapped up with what has now become a Carolina Cup Tradition, "The Champions Clinic" (also known as the Danny Ching Clinic!). This is one of the things that makes this event, and this sport, so special. Danny has just won one of the most prestigious races in the sport, he is probably "dog tired", and he takes the time to spend another day in Wrightsville Beach providing a free race clinic. Do you think Bubba Watson hung around Augusta the Monday after the Masters to provide a free golf clinic? 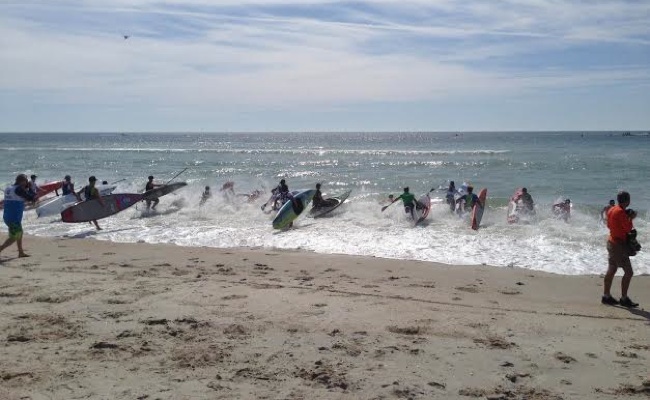 The start of the Graveyard Elite Race | Image: John Carter 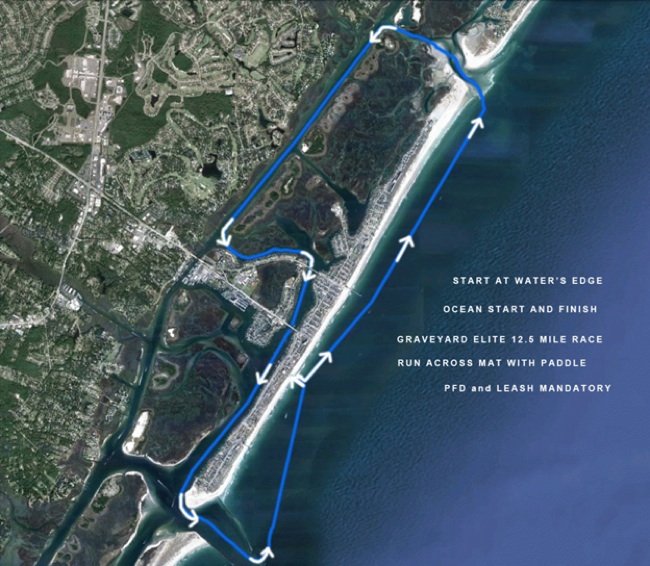 More in this category: « 2014 Battle of the Paddle Preview 2014 Chattajack Race Video »