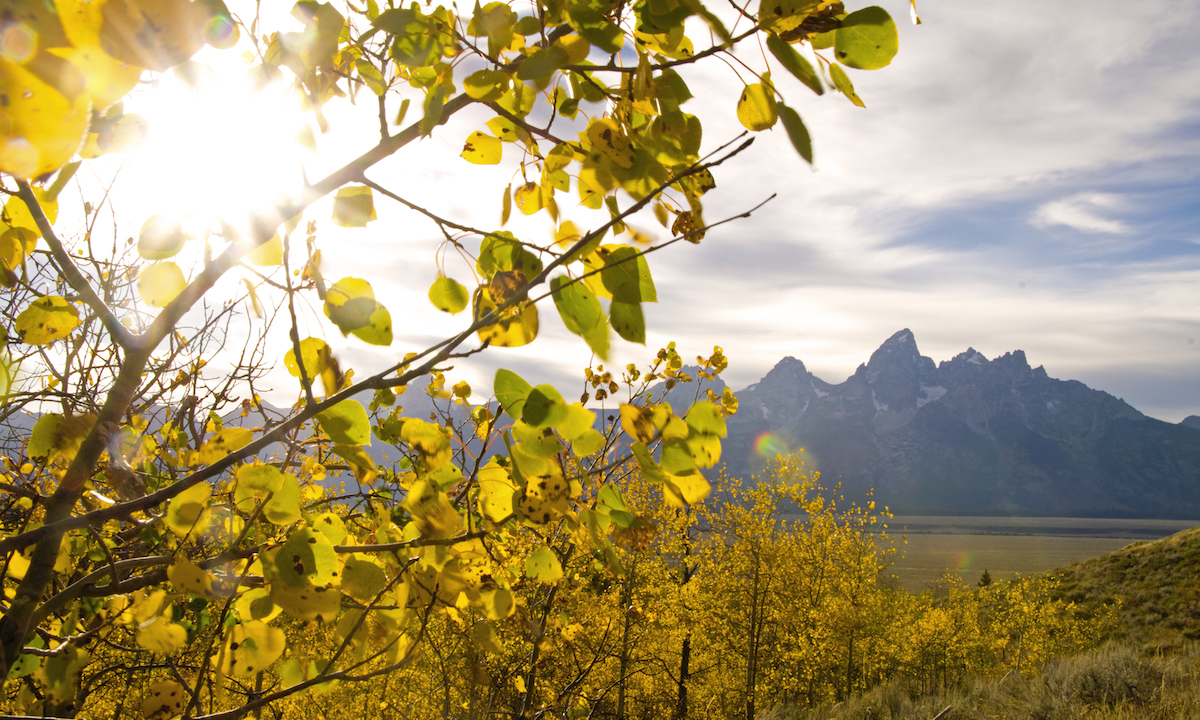 Out of all the species of trees in the world, Aspen represents the change of season quite well. In Spring, their leaves are bright green. Painting the landscape with color, lifting the spirits of everyone, knowing that the long winter is over. At the height of Summer, the color fades to a softer green. Winter the leaves shed allowing the stems and roots to collect snow for when the earth warms to repeat the process. However, Fall is where across the west, Mother Natures’ greatest art show happens. Not only rivaling but exceeding all artists to ever walk the earth. Their leaves paint the earth with yellows and bright reds and every shade in between. This color extravaganza inspired the trip to paddle Jackson Lake in Grand Teton National Park with shorelines dazzled in nature's color. 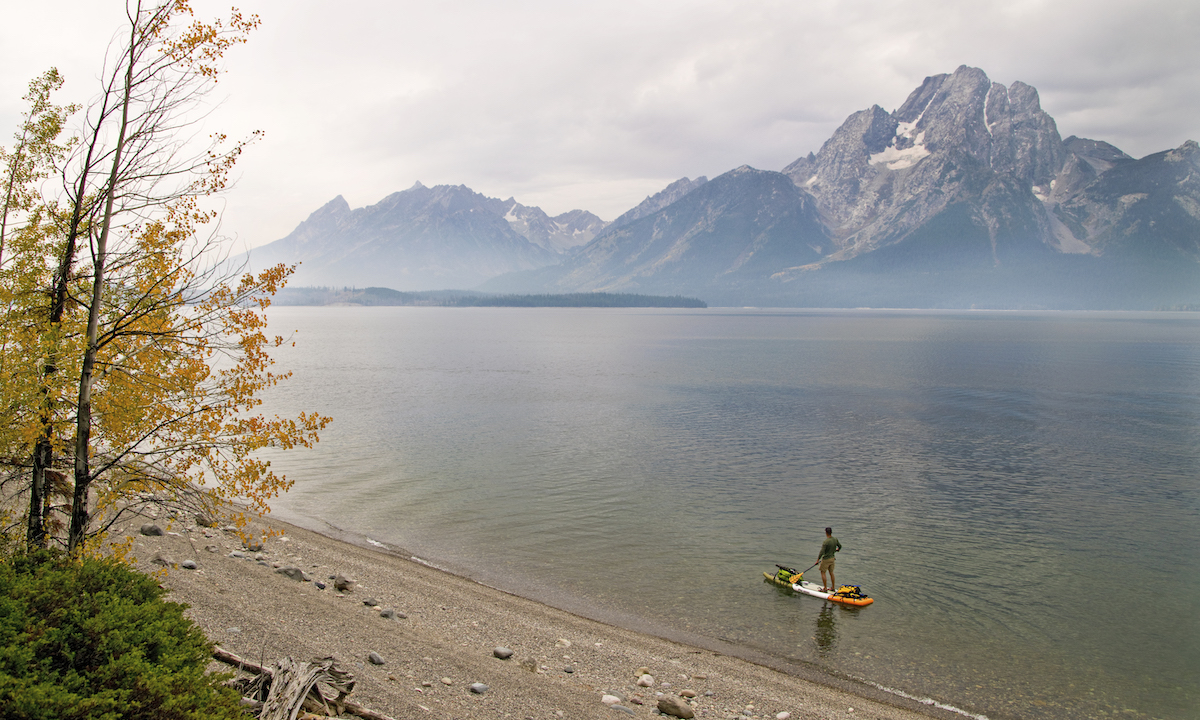 Finally at the docks of the marina after a long drive from my home in Bozeman, Montana, I pumped up the board, packed the dry bags with camping gear, strapped everything down and set off on glassy conditions with a curious little fox smelling and checking out the scene as my farewell sign from civilization.

Jackson Lake has many road-less miles of shoreline and backcountry sites with islands all at the base of Mount Moran with Grand Teton in view. I sadly only had a single nights time. So I chose a site eight-miles from the dock on its own private island near the base of Mount Moran. The eight-mile paddle took me no more than three hours with what had to be some of the most ideal conditions any paddler could ask for. 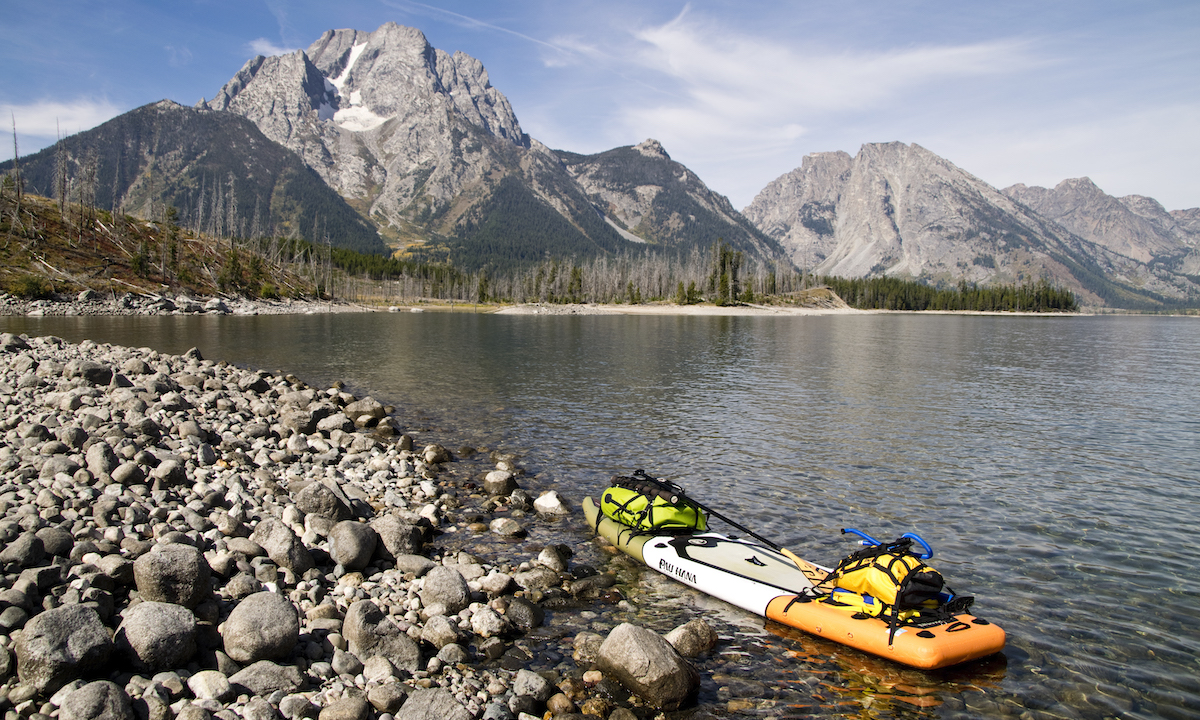 Jackson Lake is sadly dammed. Water is controlled coming out of the lake, regulating the Snake River flows as it meanders south through the park, passing the town of Jackson, Wyoming and further to its destination with the Columbia River. The Snake River also flows into Jackson Lake on the north end. During my paddle, I could see the height of the run-off from spring as I paddled the shoreline of the lake with 15-20 feet declination now in late Fall.

But with this drop in water made for easy break decisions during my paddle as I had huge beaches to choose. The solitude of the trip however was real. The only other signs of human life on the lake were of footprints from weekends past along with the distant fishing boat a mere dot on the landscape, trolling for the deep dwelling Lake Trout that thrive in Jackson Lake.

With the conditions continuing for the entire paddle and well into the day, my noon arrival to camp was made. With it being Fall and the lakes drop in water levels from Summer's drain, my island was now nothing more than a peninsula.

If my apparent solitude wasn’t realized upon departure, landfall at camp with bear and elk prints reminded me. But with solitude comes confidence, and confidence comes satisfaction with completion and joy being bedfellows in the backcountry with nothing around but myself and nature, all powered by my Pau Hana Surf Supply paddleboard. Squirrels, geese, and uncatchable cutthroat trout splashing near shore were the only sounds around while I unloaded the board and made ready for the afternoon and evening relaxing and fishing along the lake shore. 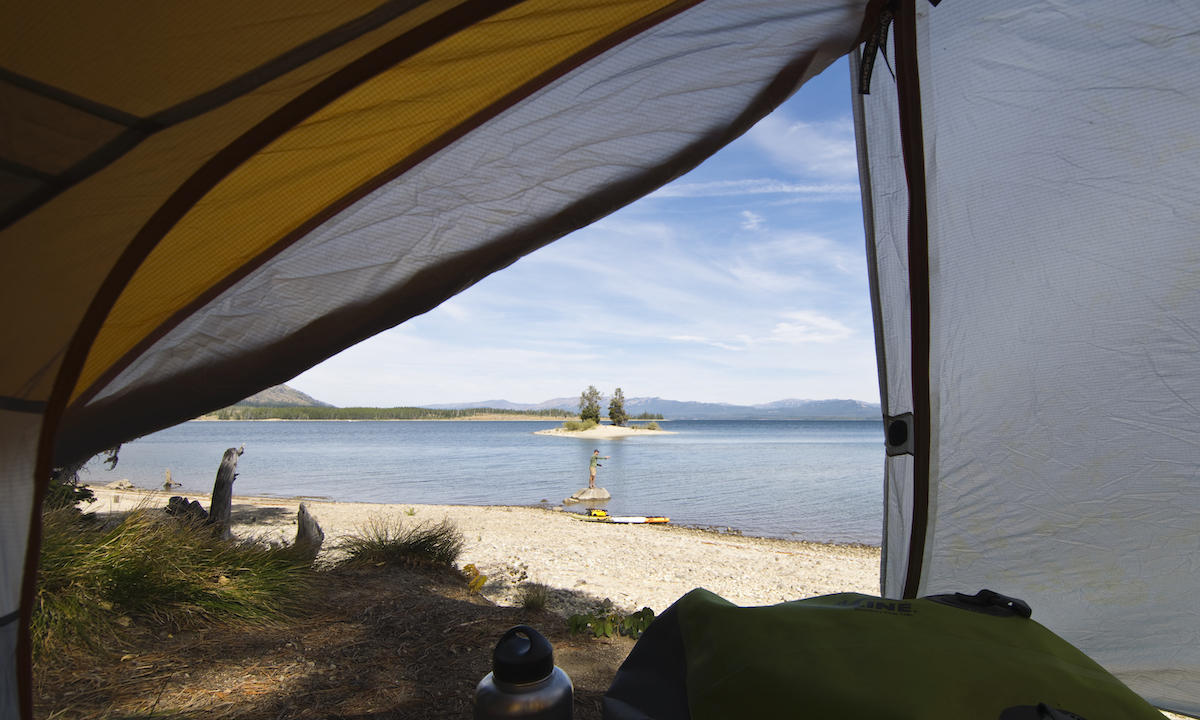 A fire was made with the downed and washed up wood from shore. At camp the tea was poured, warming both the body and soul watching the moonrise and sunset. The lake calmed from its afternoon white capped conditions, and the wake of geese and rising trout shimmered on the evening glass, reflecting the red and orange hues from the night's sunset. Darkness slowly crept in and the warmth from the tea eased my passing in an attempt to get some restful sleep after a wonderful day of paddling. However the sleep was non-existent. But I wasn’t complaining.

Almost like clockwork, as my head hit the pillow, the sounds of Grand Teton National Park came alive. The forest cracked with branches and squirrels continued squeaking deep into the night. Geese continued honking to one another both near and far and trout splashed the water while the osprey continued searching and diving to them in the light of the full moon. 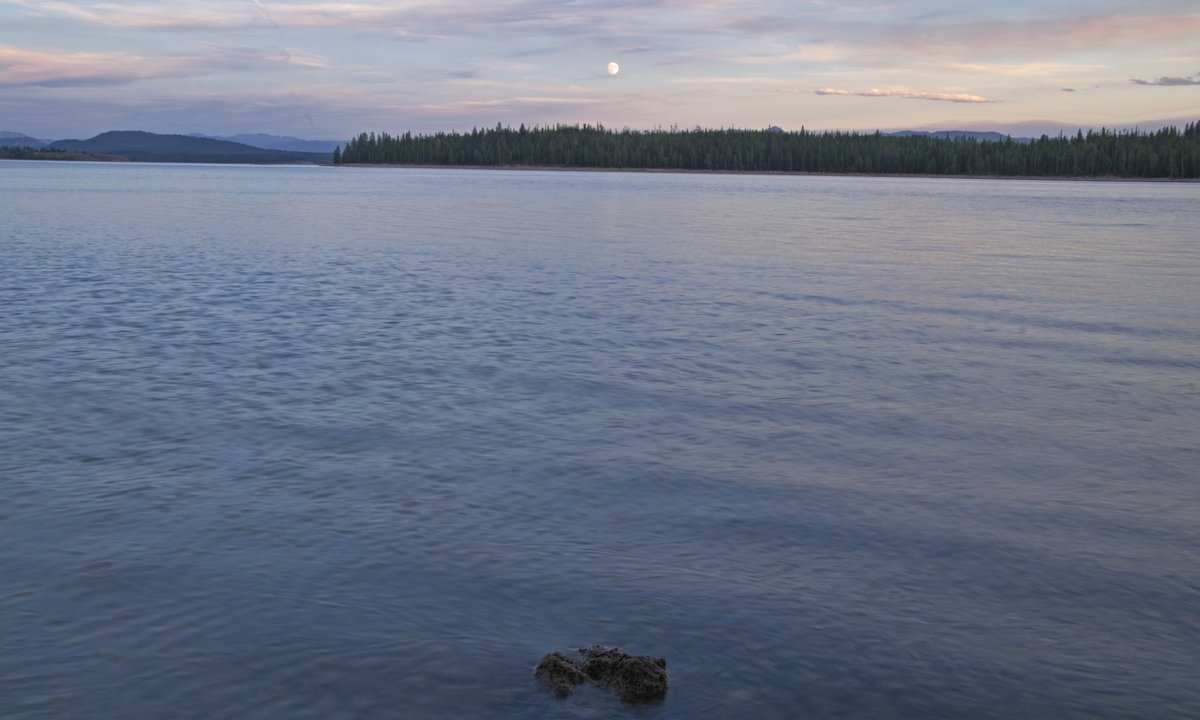 The final play of the evening show were two bull elk bugling back and forth for hours from across the wide bay to each other. At first notice, I shivered with fear for the sounds of night are intensely magnified, cloaked in a tent. After a certain amount of time though, the fear turned to fascination and gratitude as the sounds of nature, hindering my sleep, were an absolute spectacle. 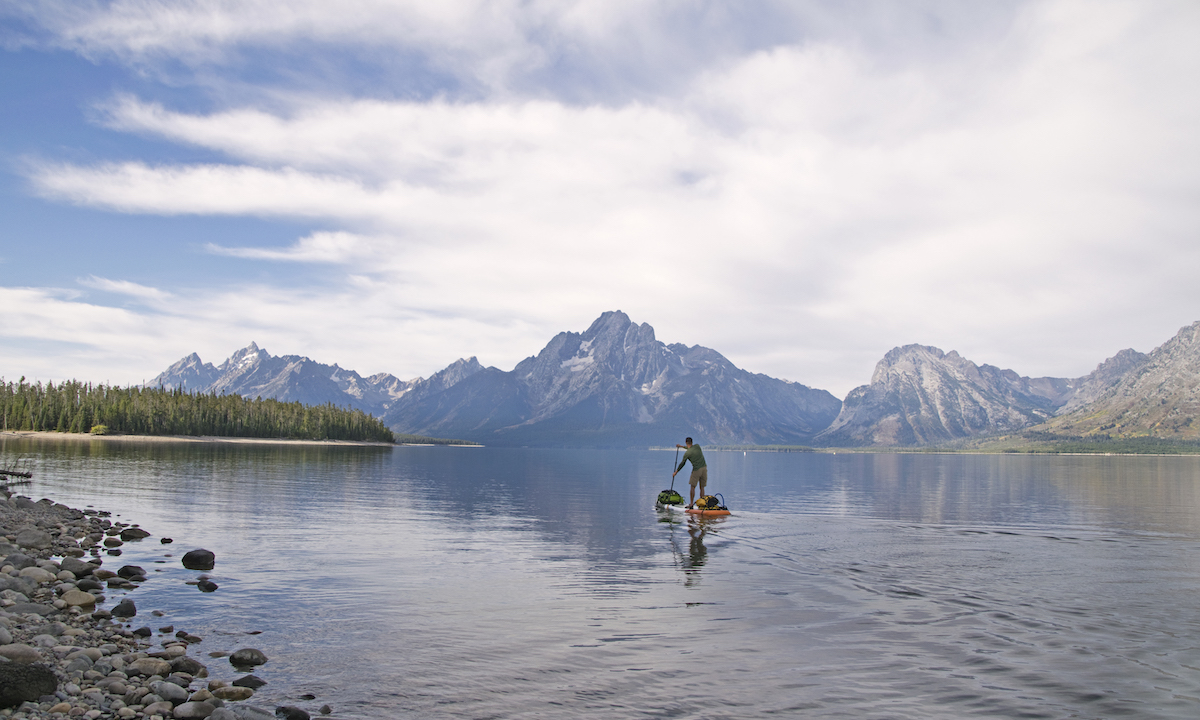 Sunrise beckoned with a very large and strong cup of coffee while painting the location of the sounds I heard. The time came to pack and head back to the car for the looming clouds above the 13,000 foot Teton’s reminded me of the daunting forecast with another day of glassy conditions. Following the shoreline of brightly lit aspens glowing in the overcast day of the park, all the way back to the marina. A few confused looks as I unloaded the board and put everything away from the fellow tourists jumping onto their boats, I started the car and made my way north. Following the lakeshore with anticipation for the following season and other opportunities to paddle Jackson Lake.

Do you have a SUP journey you want to share? Send us an email!

Sean Jansen is a freelance writer and photographer currently based out of Bozeman, Montana. He was first introduced to the sport by then neighbor, Rob Rojas in San Clemente, CA. Since then, he has moved to the mountains and has taken his SUP into Yellowstone and Grand Teton National Parks, the first to do so in Yellowstone. He has floated trout rivers for new fishing access, and trains on the reservoirs of high alpine lakes. Now spawning adventure with conservation, he hopes to continue this path of combining the two.

More in this category: « 38 Days Afloat: A Trip Through Sweden