India is older than your great grandparents but the sport of stand up paddle has just begun to make its way to India's storied waterways. Be the first to explore this country by SUP and let Surfing Yogis show you how. 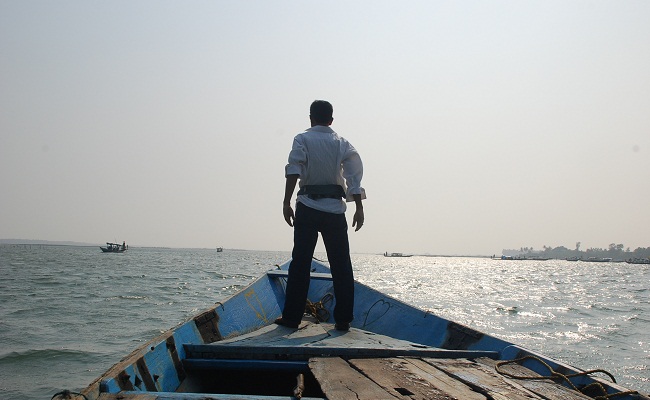 This dude is standing on a BOAT, in a LAGOON, in INDIA. Impressed?

World heritage monuments, powerful waves, and crystal clear waterways around the Bay of Bengal has inspired the young surfing club Surfing Yogis to introduce stand up paddle boards in this tropical paradise. Although it is relatively new to this region, SUP is accepted and considered one of the more environmentally conscious ways to explore the bayside sanctuary through the rivers meeting the ocean in its natural form. Since ancient time, the cosmic solar healing properties of this area continue to improve yogic powers.

The season to catch wind free rides is from November to March. During these months the temperature is in a comfortable range of between 15 to 17 degrees Celsius. The temperature can also spike up to 30 degrees Celsius during this time of year so it is best to stay hydrated and to keep an eye on the thermometer before going out for a paddle. Humidity can get up to 60% during the months of February and March so forget about staying dry in or out of the water.

The weather becomes hot, humid and windy by the beginning of April and gets worse when spring melts into a sweltering summer, forcing most outdoor activities to be undertaken in the wee hours of the morning or the tired hours of the late afternoon. Orissa is also subject to intense cyclones in late summer and early fall so it is best to heed the warnings of high winds before testing your mettle against these tropical beasts. (Join Destination Group.)

Back in 1991 I led a team on a coastal expedition of India. Ever since then, adventure on the beach has been my passion. This passion inspired me to create an organization in 2002 called the Rangers Adventure Foundation in the bay side forest on Puri Konark Marine Drive Highway. The organization is a unique place for camping facilities on a secluded beach hideout. In April of 2011 I founded the first surfing club of India with support and assistance from an Australian surfer names Justin and a Hawaiian SUP surfer named Jogi. At present, Surfing Yogis offers both surf and SUP expeditions in the beautiful state of Orissa, well known for its meandering rivers and peaceful lagoons.