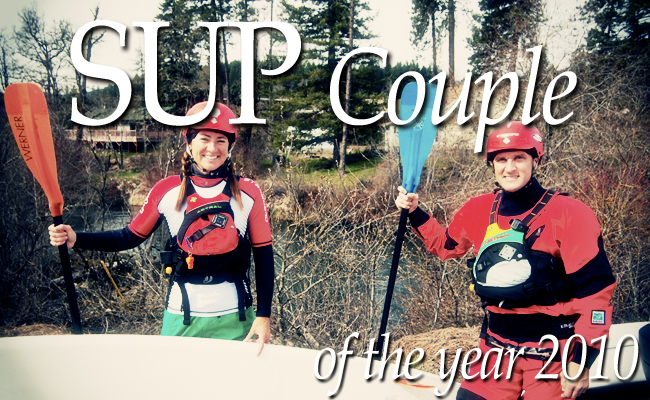 After a highly contested challenge, Dan Gavere and Nikki Gregg, one of the event’s favorites, clasped the first ever title of Sup Couple of the Year. This was one of our fiercest competitions and there were plenty of surprises along the way.

Nikki Gregg and Dan Gavere with all their stand up paddle board gear for the rapids. Photo: Rob Casey.

SAN DIEGO, California – After a highly contested challenge, Dan Gavere and Nikki Gregg, one of the event’s favorites, clasped the first ever title of Sup Couple of the Year. This was one of our fiercest competitions and there were plenty of surprises along the way. First, the audience submitted a great amount of nominations to be considered for the title. And second, some of the wild cards had an impressive amount of support and rose to the top, almost overtaking some of the other more established names. But with all that said, let’s take a look at our winners.

Once all the ‘likes,’ ‘comments’ and ‘wall posts’ were counted, making Gavere and Gregg the popularity winners, we then looked at their record to see if their audience feedback matched up with their resume in the sport. And sure enough, it did. The three criteria used in this second-stage assessment, just like with the previous challenges, were: community involvement, ambassadorship, and performance, with the latter not weighing nearly as much as the former two. By community involvement, we simply mean a regular attendance at stand up paddle events, for we want to ensure that the Sup Couple is not purely a media creation with very little personal, grass roots touch to their profile. As to ambassadorship, it’s adding a productive, cheerful and welcoming attitude to their community involvement. And finally, performance is in place to make sure that the Sup Couple, as a standard bearer for the sport, is proficient and competent in stand up paddling.

On community involvement it’s hard to ask for more. These two seem to be nearly everywhere there is a stand up paddle event. Here is a quick preview of their year – and this is by no means a comprehensive summary. Earlier in the year with the Battle of the Paddle Hawaii; touring Chile on stand up paddle boards, eventually making the cover of the Stand Up Journal; in Florida for the Yolo Festival; back to Hawaii for final shoots of Gregg’s DVD; back to California for the Battle of the Paddle California; staying in Southern California for the Socal Ocean Racing series; then off to San Francisco for the Wavejet Race; and so it goes with this incredibly busy and full of enthusiasm couple. “It even seems that you have some clones running around attending all these events,” remarked Leslie Kolovich, host of the Stand Up Paddle Show.

Then onto ambassadorship. Gavere and Gregg are some of the most cheerful, welcoming, and productive couples you’ll ever meet. It takes learning just a little bit about them to see all their enthusiasm for the sport. Gavere works as a sales rep for a paddle company, personally educating people from all walks of life about stand up paddling. Also, he has released a DVD called ‘The Ultimate Guide to Stand Up Paddling,’ which has become one of the most authoritative sources for how to stand up paddle board. Gavere has also been the leader in white water stand up paddling, taking the sport to a whole new frontier. And the list goes on with the Hood River local. Gregg is equally productive in the ‘sup’ world. She has held myriad sup fitness clinics all throughout the United States, inspiring thousand others to pursue the fitness career in stand up paddling. Like Gavere, Gregg has released her DVD, which goes into the details of stand up paddle fitness, technique, and beyond. She, with her own white water experience under her belt, has joined Gavere in introducing stand up paddle boarding in the rapids. The two of them have been prolific writers about the sport, with articles and columns ranging from how-to’s and fitness tips to equipment guides and safety manuals. By now you start getting the picture of why their public support is so widespread, no?

Moving along, we have performance. Now Gavere and Gregg are not only educators but also performers. Both of them are fierce competitors in stand up paddle racing, leaders of stand up paddling in rapids, and some of the most iconic figures on fitness. Without a question, it’s tough to top that when it comes to Sup Couple of the year. Gavere is still one of the fastest stand up paddle racers around, often coming among the top finishers. And not only is Gregg a fitness master, but she is quickly becoming a rising star in some of the race circles. Looking at the white water world, these two have an unmatched resume as a couple. You can find them doing anything from river surfing and going over the falls to tackling rough rapids and simply cruising on scenic river runs. Both of them also sup surf, which just adds all the more to their already impressive portfolio. And now with the title of Sup Couple of the Year 2010, we hope that they’ll be all the more empowered to continue their great contribution to the sport, with their stellar community involvement, ambassadorship, and performance.