GALVESTON, Texas - Today I am excited to announce the addition of our newest team rider, Joe Cerdas of Galveston Texas.  I don’t think anyone would argue that Joe is the best SUP Racer in Texas, but after seeing him in both BOPs last year, he clearly proved he belonged among the rest of the Elite Racers from all over the world.  I have personally raced against Joe a couple of times, and even I was surprised by how well he did.  I suspected he had it in him, but I thought it might take him a season to calibrate his training and racing to that level of competition.  Happily, he proved me wrong.  I am really stoked and excited he decided to join our team.  Some of that is because he is a great racer, and ambassador for our fins (in fact he approached us after racing on our fins for a while), but most of the reason we jumped on this opportunity is because of the person Joe is.  Simply put, Joe is a hero.  He is a lifeguard, a peace officer, and he has participated in multiple hurricane rescue missions.  That is the type of person we like associating ourselves with.  Joe is a SUP Gladiator through and through. 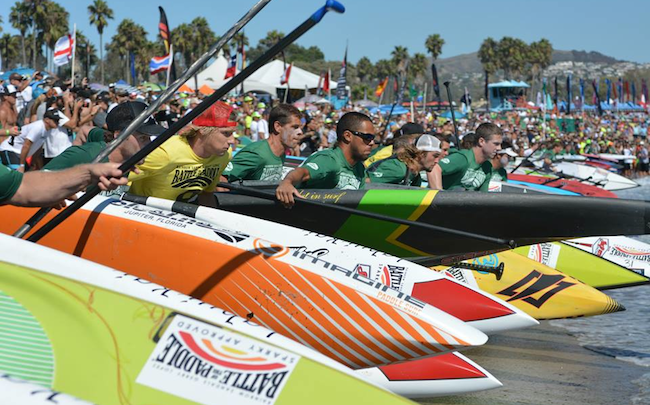 My name is Joe Cerdas, and I am a SUP racer and also an Open Water Lifeguard Supervisor and Peace Officer with the Galveston Island Beach Patrol.  For the past several months I have been training, and racing with SUP Gladiator race fins (Elite, Pro, and Hybrid). I competed in The Battle of the Paddle in both California and Brazil using SUP Gladiator fins, and found them exceptional, despite very different water conditions. California had moderate winds around 10mph with waist high surf, so I used the Gladiator Pro and it performed great in the surf and cut right though the heavy kelp with no problem.  The Gladiator Pro fin gave me greater stability and tracking, and I was also able to keep my stroke rate @ 8 strokes per side.  At the BOP race in Brazil the conditions were much more challenging, 20mph side shore winds with 4-5ft chaotic surf. For this race, I opted to use the Gladiator Hybrid fin.  I felt like I was locked in when popping over waves and while surfing to the beach, but I was even more impressed during the 9-mile distance race with half the race facing a heavy cross-headwind. The Gladiator Hybrid fin gave me the ability to track and hold a better line while keeping a high stroke rate.

Joseph M. Cerdas was born on December 26th, 1987 as a BOI (born on island) on Galveston Island Texas. His parents love for the sea, nature and sports inspired him to become a waterman. Growing up in a warm and secure family environment and surrounded by the sea he developed his interest for helping people.

He started at 16 years old as a lifeguard for Galveston Island Beach Patrol (GIBP) and after finishing high school he traveled to Costa Rica, his dad’s homeland, where he had the opportunity to continue his training as a lifeguard and to surf Salsa Brava a famous reef break. After he returned to Galveston in 2009, the Island was devastated by Hurricane Ike. Joe Cerdas, as a member of GIBP, helped families evacuate their homes and rescued many others. Hurricane Ike was a category 4 with winds up to 145 mph, the third costliest storm to hit the U.S.  Afterwards he received the Heroic Act Award from the United States Lifesaving Association in recognition of his commitment to safety of the residents and visitors of Galveston Island: specifically for heroism far and above the call of duty in the protection of life, limb and property during and immediately following the Hurricane.

That same year he left to train lifeguards in Boca del Rio, Veracruz, Mexico. Joe trained the lifeguards in proper rescue techniques, CPR, PWC Operator and then worked there as a lifeguard. While in Mexico, Joe and his lifeguard brothers helped rescue over 300 people from their homes during Hurricane Karl. Hurricane Karl was the most destructive Hurricane to strike the state of Veracruz on record as a Category 3. Shortly after, Joe returned to Galveston for a full time position as a lifeguard supervisor and peace officer. He also finished his training for Marine Safety Enforcement Officer, the American Red Cross CPR AED instructor, and Swift Water Rescue Technician at Texas A&M University. Joe continues to further his training as a Lifeguard and Waterman.  In 2011 Joe married his fiancée from Veracruz, Mexico. They now have two sons. Joseph Manik Cerdas and a short 14 months later their second son, Leon Kaban Cerdas joined the family. They are the second generation BOI of the Cerdas family. 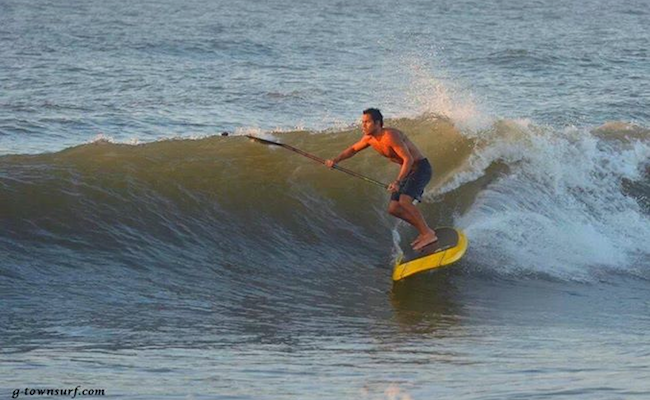 For more information, please check out the SUP Gladiator website.