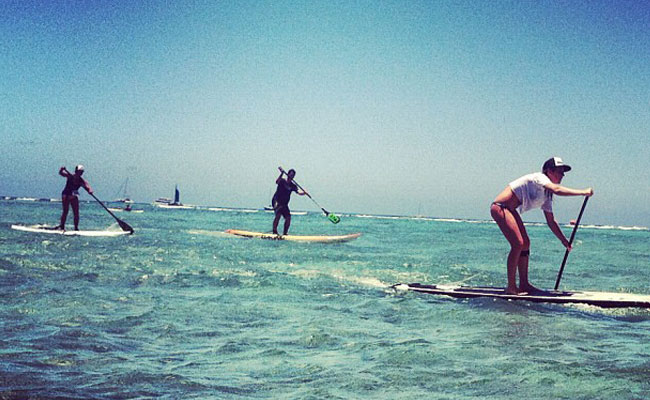 Paddleboard racers in Hawaii who had just paddled outside of the surfing and swimming area without lifejackets.

DANA POINT, California – US Congressman Dana Rohrabacher, a Republican from California's 46th District, sent a letter to the US Coast Guard urging the commandant to strike downt the provision that apparently requires stand up paddleboarders to wear a lifejacket when not in the surfing or swimming zone. The US Coast Guard ruled that stand up paddleboarders are subject to boating regulations when not in areas officially designated for surfing or swimming. And as a result, when not in these areas, it is believed that stand up paddlers are required to carry a lifejacket or personal flotation device, among other things – a perceived rule largely ignored by paddleboarders and waterways safety personel.

Furthermore, he argues that such rulings should be left to local authorities, which are better equipped to address these issues and can be more easily held accountable by the local community. “As a surfer, I am convinced that restraint of federal power, in favor of local rules, brings about the best result. Let’s not let an overzealous federal regulatory impulse create disarray in uniform water safety enforcement policy that has worked well for over 30 years.” Rep. Rohrabacher asked for paddleboards to receive the same classification as sailboards and windsurfing. The US Coast Guard is yet to respond to his letter. For more, read the Orange County original article on Rep. Rohrabacher's letter.)