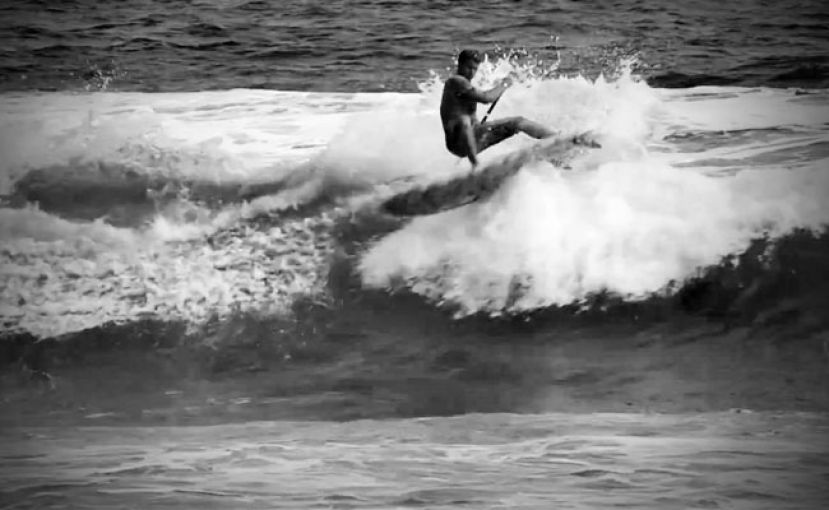 Zane Schweitezer on an off-the-lip turn at the final leg of the SUP Surf World Tour on the Big Island of Hawaii.

Zane Schweitezer claims his first win at the Stand Up Paddle World Surf Tour while his fellow Maui islander, Kai Lenny, claims once again the title of world champion, coming in second place at the last leg of the tour.

BIG ISLAND, HAWAII – With an incredibly talented crop of younglings in the lineup, the Stand Up Paddle World Surf Tour presents a thick field of competitors. Among them are Sean Poynter, Kai Lenny, Zane Schweitezer, Conner Baxter, Matt Becker, Brandon Rose, and on goes the list. Plus, making it all the more challenging, you have the more seasoned sup surf competitors in the likes of Antoine Delpero and Aaron Napoleon, to name a few. In the midst of all this talent, the youngsters claimed the top spots in the last leg of the tour, with Zane Schweitzer 1st, Kai Lenny 2nd, Sean Poynter 3rd, and Bullet Obra 4th place. (See Paddle Surf Hawaii Boards used by the Napoleons.)

Conditions were quite challenging, with head-high waves rolling in from multiple directions, no clear channels, and some considerable winds – the usual picture of an island contest. In all of that, the FCS Sup Surf team came out swinging, claiming 1st, 2nd, and 3rd in Zane Schweiter, Kai Lenny, and Sean Poynter, respectively. The team unleashed (no pun intended) a spectacular combination of front and back-side attacks, Schweitezer charging his front-hand while Poynter and Lenny engaged on their back-hand for the most part.

Here is some gear insight for the curious ones out there. Schweitzer used the H3 Nexus Large, Lenny the K2 tri set (unconfirmed), and Poynter the K2 quad set.  “I have been using the nexus H3 for a couple of months and I really like them,” said Schweitezer. “They hold a line and drive very well and release great with good control when sliding backwards. I think these are the best fins for high performance stand up paddle surfing in small to medium surf (1- 5 feet).” Poynter had similar thoughts on his K2 quad set. "Yea this Quad set up was exactly what I needed in order to keep up with the quick Honoli'i lefts. Clearing sections and speedy turns up into the lip were possible with the K2.1 Quads. I ended up running with the K2.1 Quads all event." (Check out FCS SUP Surf Fins.)

Anyone with any scintilla of knowledge on stand up paddle surfing understands how hard it is to work your back-side, especially when waves are powerful and throwing from every side. Nonetheless, Lenny and Poynter delivered a jaw-dropping backside performance, especially the Floridian expat, Mr. Poynter. Charging one off-the-lip after another, he served Schweitzer with some high scores, but those weren’t enough to stop the islander lad. Schweitezer responded with radical front-side turns and solidified his win, putting those FCS fins up in the air, time and time again. Following in his footsteps, Lenny caught a right-hander and was able to bust some fins, overtaking Poynter in the final seconds of the heat. This marks the end of yet another year for the SUP Surf World Tour and foretells of the barrage of talent to be on display in the years to come. (Watch SUP TV Live.)

Who is your favorite stand up paddle surfer, on or off the tour?