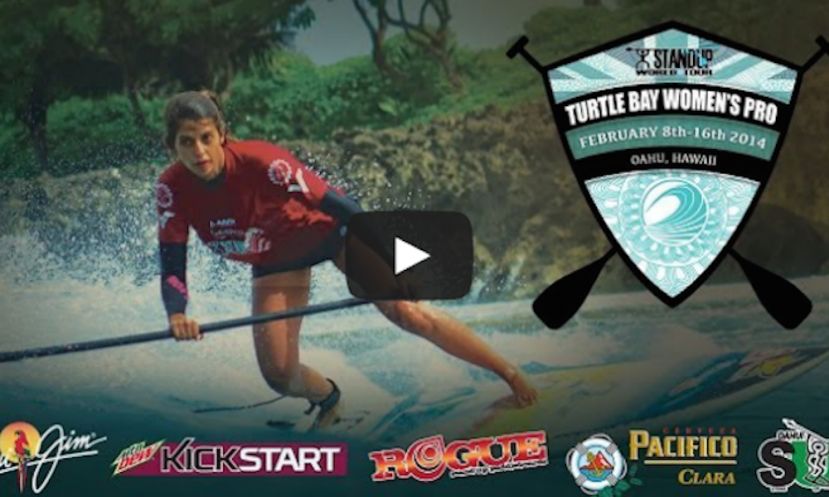 TURTLE BAY, Hawaii - Nicole Pacelli has won the first event of the Women's Stand Up World Tour for the second year in a row, in challenging conditions and a growing swell at Turtle Bay, getting her 2014 World Title campaign off too a good start.

It was an international affair, as Candice Appleby (USA), Sophia Bartlow (Hawaii), defending World champ, Nicole Pacelli (Brazil) and Aline Adisaka (Brazil) broke through to make the top four. The lead changed glands several times throughout the thirty minute final and things were looking even until the halfway mark, until Nicole took charge and showed exactly why she is the world champ, threading stylish carves and vertical turns together.

Candice Appleby was ripping, doing some of the best surfing we've seen from her - which is especially impressive, since she's coming off hand surgery for the second time in less than a year.  Sophia Bartlow showed signs of a big future, picking off some bombs and surfing solidly, as did Brazil's Aline Adisaka.

Conditions improved through the day and peaked in the final, when some bigger sets pulsed through the lineup and gave competitors a good rinsing out.

The Unofficial Results are as follows:

Event organizers will convince tomorrow morning to assess conditions for a possible 7 a.m. start to the Men's Sunset Beach Pro.

Supconnect will be posting a link to the live player HERE.