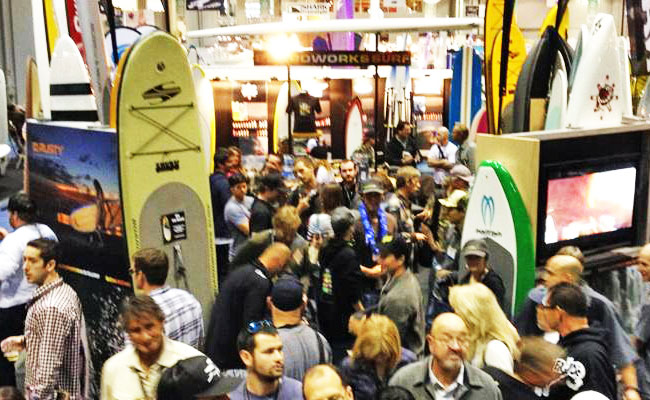 Crowd gathering in front of the Boardworks Surf booth to hear the announcement.

ORLAND, Florida – With incredibly talented standup paddlers showcasing highly technical moves, it wasn’t easy to settle on one winner. But after all the audience feedback (through facebook and twitter) and expert judgment, 360-degree stand up paddle board moves carried the day, with Kai Lenny's nearly impossible sup dive in the mix. (See Sup Move Submissios.)

Dino Tassara, from Hawaii, had an impressive combination of backside 360’s and style. He made backside helicopters look flawlessly easy even though they involved very intricate footwork. Putting on a challenge to Tassara’s backside helicopters was Noah Yap from Maui, who is a phenomenal paddler on his own right, as well as sup trick master. With a mix of tail 360 and stance switch, Yap had an incredible showing and rightly tied with Tassara for first place. Kai Lenny, showing why it's no accident that he is the world sup surf champion, performed a duck dive but this time on his stand up paddle board – a completely novel maneuver by all counts. And coming 3rd is Mike Harvey who adds the white water element to the contest, performing a tail-360 on a standing river wave.

Winners will receive each a SHUBU (Boardworks Surf’s inflatable stand up paddle board), a three-piece paddle, and team gear. Second place gets a paddle and Boardworks competition team gear. And third place walks away with team gear. We’re now ready to accept submissions for the 2012 What’s Your Move Contest? and we also encourage everyone in the audience to go out, paddle, and have fun trying the different tricks. Make sure to share them with us. (See Sup Move Submissios.)