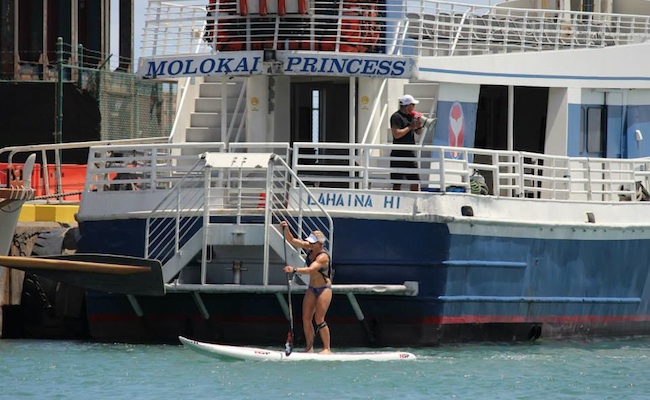 Australia - NSP is excited to announce the signing of Terrene Black to its team. ·Terrene’s solid performances in big global races and background as a professional lifeguard and all-round water athlete make her an ideal addition to join Travis Grant and Rico Leroy at the top of the game in SUP racing as the NSP brand continues its expansion.·

“I'm so excited to become part of the NSP team! With the new DC race models, I know I'll be on the most competitive boards around.  From first board to first place these guys know how to make boards.  I can't wait to race them!” said Terrene upon inking the deal.

The day after joining NSP Terrene boarded for Hawaii in preparation for the 2013 Molokai to Oahu race regarded as the long distance world championships.  In 2012 she placed a solid 3rd and this years training program and solid 2013 results at the NSW Titles (2 x 1st’s) Oahu’s 4th July Da Hui Paddle Race (1st), Cline Mann (1st) and this weekend’s Maui to Molokai (1st Place) mean that she’s on course for a solid result.

Terrene joins NSP in a joint initiative with Global Surf Industries and both NSP and GSI are stoked to have her on board.

“Terrene is an athlete at the top of the pile, I am so stoked to have her on the team and with the boards we have for her to ride it’s going to be great to see another athlete on the podium flying the NSP flag” commented Chris Chamberlain, Global Brand Manager.

NSP uses the line ‘From first board to first place’ to describe the brand and its product range.  The Dale Chapman racing SUP boards have now been released to market and along with 6 other constructions including the Patented ‘Coco Mat’ technology NSP’s range is fast becoming the most comprehensive on the market.

More in this category: « Save a River, Send a Tweet, Win a Boardworks SUP LiftSUP Celebrates 2nd Full Year & 35,000 Handles »