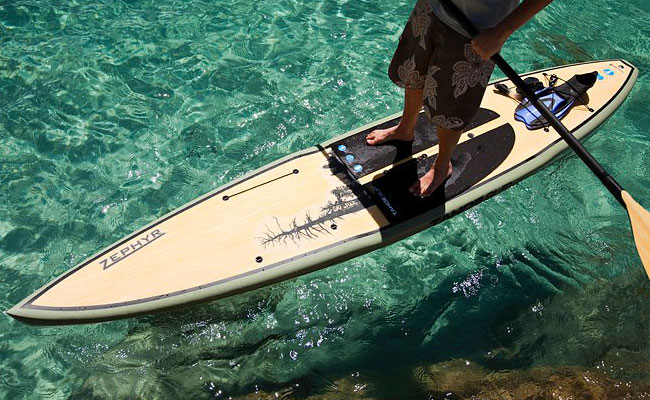 Tahoe SUP Board in its native waterways up in the mountains at Lake Tahoe.

HUNTINGTON BEACH, CA – Quiksilver Waterman Collection recently partnered with Mother Ocean and Tahoe SUP to launch a yearlong project in 2013 called Expedition Florida 500 (XF500). XF500 is a modern-day exploration of Florida’s coastline, waterways, and marine ecosystem as seen through the eyes of the waterman. 2013 is Florida's 500th anniversary since Ponce de Leon discovered the land back in 1513; in celebration of this momentous occasion, the three organizations will unite to embark on a yearlong journey combining the best of exploration, adventure, stewardship, science, and sport into a package that will include the full gamut of the waterman’s lifestyle.

The team will consist of watermen from all three organizations, spending the first half of the year exploring the coastline: chasing hurricane swell in the Atlantic, freediving Spanish shipwrecks, sailing in the Gulf of Mexico, stand up paddling the state’s coastline, catching mini-season lobsters in July, spearfishing in the Dry Tortugas, stopping into local beachside communities and hosting cleanups. They’ll encourage others to paddle with them, including team riders from Quiksilver and various celebrity paddlers. They’ll also be mapping the coastline and waterways with the help of Below the Surface and their Riverview Project (imagine Google Street View for rivers). In addition, the team will be collecting research and data along the way to further ocean science.

Team XF500 will then turn inland, spending the second half of the journey along the rivers, lakes, estuaries, and marshland – the intricate network that makes up the Florida marine ecosystem. They’ll document, map, and explore the waterways in similar fashion as they did with the coastline. They’ll camp and airboat through the Everglades, canoe the natural springs, drive old pickup trucks that run on algae biofuel, film amazing Florida wildlife and scenery, kayak and stand up paddle the rivers and waterways, and leave the land in better and cleaner condition than when they arrived. Camping and living off the land will be the norm.

The expedition’s primary goal is to highlight the importance of stewardship efforts as they relate to the ocean, coastlines, waterways, and the marine ecosystem. Florida is unique in that it embodies the entire marine waterway system from source to sea – one of the few places on Earth with such thriving wildlife and a natural environment based around water. The team will document their journey through daily blogging, daily photos and videos for social media outlets, filming for their own documentary, and filming for Tahoe SUP’s EXPLORE project series.

XF500 was designed by Justin Riney, founder and Executive Director of Mother Ocean. Riney recently launched Mother Ocean on January 1, 2012 with the purpose of creating, inspiring, and empowering ocean advocates worldwide. “Our goal with Expedition Florida 500 is to merge our passion for ocean advocacy with an incredible storyline that resonates with the masses. With the help of Quiksilver and Tahoe SUP, our voice and platform will reach a global audience. XF500 is just the beginning – we’re rallying the troops.” Riney will lead the expedition with Peter Mel of Quiksilver Waterman Collection, Matt Kechele of Quiksilver, and Nate Brouwer of Tahoe SUP rounding out the project management team. In addition, both Quiksilver and Tahoe SUP have designated Riney an ambassador and team rider for their brands.

More in this category: « Speedboard USA and Zurn Yacht Launch SUP Boards Suplove is Featured on Reuters, a News Powerhouse »