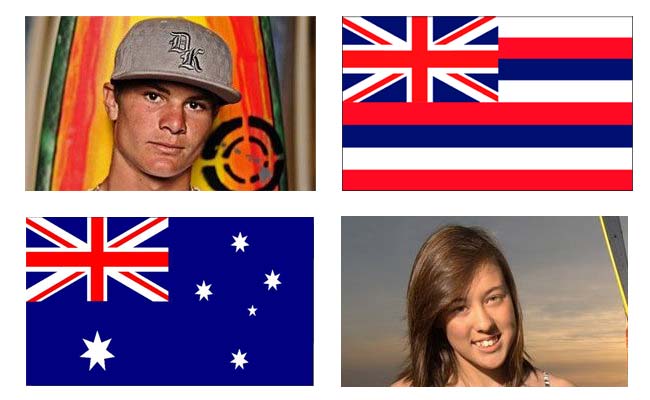 Zane Schweitzer from Hawaii (top left) and Kristi Page from Australia (lower right) representing their countries on the lead.

SAN DIEGO, California –  Alright, if you have any familiarity with surfing whatsoever, the rivalry between Hawaii and Australia is old news to you. Now Kristi Page and Zane Schweitzer with their rapid-fire vote count in the beginning of the Sup Grom Awards represent not only a long-standing rivalry but also an effective resistance from these strongholds of watermen to give way to new trends.

Take a look at the sheer population size. Hawaii has a mere 1.3 million for population while Australia brags of 22 million. Let’s put that in perspective. California has 37 million, France 65 million, and the rest of the US (with plenty of bodies of water) has 271 million. It is obvious that population size is not responsible for these groms’ lead in the Sup Grom Awards. So where is their support coming from?

Shall we try population density along shorelines? Rio de Janeiro, one of Brazil’s famous scenic cities, has 6 million people crammed along its shoreline, with temperatures over 100F degrees and 100% humidity, virtually forcing the whole population to spend enormous amounts of time at the beach just to freshen up. So, if population density along the beach were to have anything to do with the results of the Sup Grom Awards, you would think that some kid from Rio would be claiming a huge lead on the polls. But not quite. Hawaii and Australia are charging on.

If we were serious about investigating why Hawaii and Australia have so much momentum (at least as far as the Sup Grom Awards goes), you would look into things like length of coastline, inland surface water, population distribution, etc. But after all that exercise, we would likely land on one thing mentioned in the beginning of this article: the waterman culture. It is probably true that stand up paddle boarding will continue to grow inland and eventually create other powerhouse pockets for the sport. But for now, the old rivalry between Hawaii and Australia, illustrated by Kristi Page and Zane Schweitzer, gives signs that those days might be coming, but not as soon as some may have thought.

Why is California trailing behind despite its enormous Sup Community?