Gerry Lopez' Board was Stolen and Recovered through a Phenomenal Display of Community Unity. 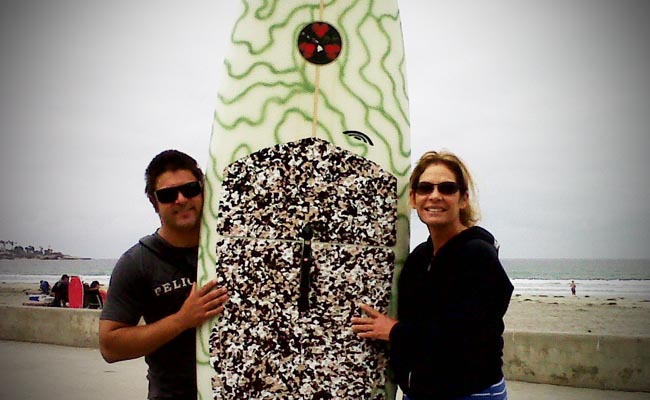 Pat Huber (left) and Alicia Barry (right) standing together after the recovery of the board. Photos: Alicia Barry.

LA JOLLA, California – In addition to the sport itself, one of the most appealing aspects of stand up paddling is its community, which is comprised of a highly cohesive and welcoming crowd of water athletes. And the theft of a stand up paddle board (believe it or not) put that unity fully on display.

This story is remarkable on many different levels, but particularly because of the people involved and the final result of the chain of events triggered by the board's theft. Three of the most prominent characters in the story are Gerry Lopez (surf legend), Pat Huber (Rainbow Sandals Marketing Director and Battle of the Paddle organizer), and Alicia Barry (one of the most enthusiastic sup surfers around). I've asked Alicia Barry, who played the leading role, to recount the story. — Andre Niemeyer

Several  months ago I saved a post that appeared on Facebook (FB) about a stolen SUP board. Thinking the board could show up locally, I actually responded to the post saying  we would keep our eyes open for the board down south.

On August 30th after a morning session I noticed the stolen SUP board being carried out of the water by a woman so I took a picture of her and the board with my blackberry. A few days later on FB I looked back through my saved posts and found the one that identified the stolen board. Once I opened the FB post photo dated May 25, 2010 and compared it to the photo I took with my blackberry, it looked like the board in the photos matched. The contact information from FB was Pat Huber who had the board stolen from his truck in San Clemente. I emailed Pat my name, number and the photo of the board I took with my blackberry and asked if this indeed is the stolen board. Immediately I receive a call. Yes!

I spread the news through my local SUP network by circulating the photos on the internet, the photo from FB of Gerry Lopez riding the board and the photo I shot with my blackberry of the woman with the SUP board at the Shores. When I heard back from a couple of the SUP ladies, it turns out they had seen and spoken to the woman with the board in the water during the week. The SUP sisters commented on how lovely the woman was and how eager to share her SUP stoke! We certainly realized right away she was not aware the SUP was stolen.

2. Taking Action to Recover the Board

The following Friday I left photocopies  from the original post on FB and the blackberry photo with the Lifeguard Sergeant at the main tower at the Shores. The lifeguards asked for the contact information, mine since I was leaving the photos and Pat's since he was the victim, so I wrote our names and numbers on the photocopies.

The next Wednesday morning I was getting ready to go to the Shores when a friend calls and says the woman just walked by with the stolen SUP board and was getting in the water. At exactly the same time I receive a text from Pat asking if the woman with Gerry's board had shown up. I replied yes! She just got in the water, come down now! Pat texted back he was on the way.

When I arrived at the Shores, I noticed there was a police cruiser near the main Lifeguard tower. I went over to the main lifeguard tower and engaged the SDPD officers and the lifeguards telling them that a stolen SUP board is out on the water now and that the owner of the board was on his way down from San Clemente. The lifeguard retrieves the photocopies I left last Friday from inside the tower and asks 'is this the board?' I say yes and identify the woman in the water. I give the case number to the SDPD of the police report that Pat filed with the O.C. Sheriff's Department and they immediately start tracking it.

I walked back over to my friends to wait for Pat. While we were waiting and watching the woman on the water we noticed the lady police officer walk out on the sand to the shore blowing her whistle and motioning for the woman in the water on the SUP to come in. The woman with the SUP meets the officer on the shore and they engage in a lengthy conversation. By this time Pat had shown up. We greet Pat and point him in the direction of the police.

When the board was finally brought to the lifeguard tower I walked back over to see it up close, after all the board belongs to and is shaped by Gerry Lopez himself! The hand painted design on the board is very distinguishable yet the police officer was closely scrutinizing the photocopies to make sure it was a match. The lady SDPD officer was actually counting the number of painted lines between the nose and deck pad and comparing them to the photocopies.

I walk back to the gathering gang and we all watched Pat finally gain back possession of the board. What a beautiful sight that was. Pat walks over to us with the board very happy, grateful and gracious.

It turns out the woman with the stolen Gerry Lopez SUP is a published author and respected Doctor who had purchased the SUP at Play it Again Sports. I contacted her through Pat as I was sympathetic to her ordeal and wanted to help her get another SUP since the one she innocently bought was suddenly taken from her. So many people came forward with such amazing support. My SUP sisters all volunteered to pitch in financially to help buy a board for her. Mitch from Mitch's Surf Shop presented a very generous SUP offer, and Pat invited her to the BOP to see if there would be a SUP  board there she might be interested in. She was very happy to hear of our efforts and has since purchased another SUP .

In the meantime, the real suspects have been caught. And instead of pressing charges, Pat decided the suspects pay back the women the money she lost in the transaction. I am very happy how it all turned out and I am very thankful to our SUP community for their support. And thank you Pat for taking the time during the BOP to introduce me to Gerry Lopez, that was a great moment in time for me along with knowing in the end it all went well.