Sup shaper and shop owner from Kirkland, Washington, Bobby Arzadon not only stocks loads of stand up paddle boards, for surfing touring and beyond, but also is rolling out his own line of sup boards called 'Sup Slice.' 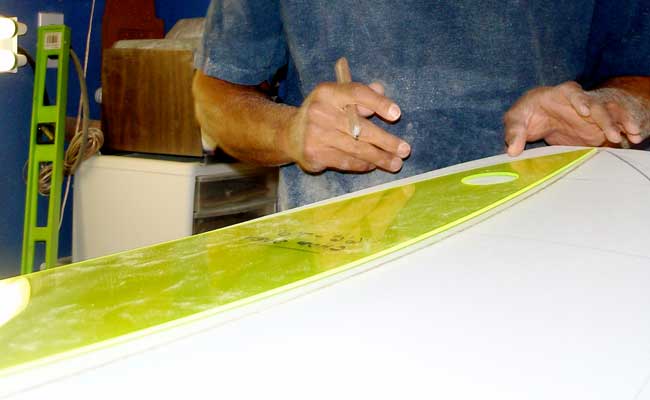 Bobby Arzadon drawing lines of his sup prototypes in his shaping room.

KIRKLAND, Washington – Hiding a surfboard in his highschool locker and skipping class to surf, Kauai native Bobby Arzadon had the stoke early on. Bobby and his father started out fixing their own boards and soon were doing ding repair for friends and neighbors in their hometown of Lihue.

He relocated to Kirkland, WA in the early 90’s to pursue job opportunies on the mainland which led to work as a CAD designer for an engineering firm. He opened his shop, Perfect Wave in 1992 after bringing boards back from Kauai several times to sell to friends. Before SUPs hit the mainstream Bobby moonlighted as an apprentice at a surfboard manufacturer in Las Vegas traveling from Kirkland on the weekends. During this time, Bobby refined his shaping and production skills while working under shapers such as Dick Brewer, Ron House, and Al Merrick.

A decade later, Bobby’s Kirkland based shop, Perfect Wave keeps busy selling surfboards and SUPs, offering rentals, instruction and even shaping instruction. His shaping room is behind his shop. After testing prototypes, final designs are sent to a factory in China, and a few months later his containers come in with his boards. He also sells boards from Surftech, Tomahawk, Tahoe, Bark, and Liquid Shredder. A recent sale of his pointed nose 12’-6” board went to Seahawks Coach Peter Carroll.

Bobby says, “I basically think of all my board designs as my own quiver.” His new line of boards called the Slice series come with brilliant colors and graphics. When asked how he came up with the Slice name, Bobby commented, “After riding a yellow board for nearly ten years, locals would yell out lemon drop while was taking off hoping I wouldn’t make it. It always stuck with me.” He continues, “I started the Slice SUP line to design colorful, fun boards that would quench my needs for my paddling and wave riding needs.” He also designs fast racing and touring boards from 12’-6” to 18’. Local SUP racer and Perfect Wave rider, Beau Whitehead, also had some design influence on the 2011 race boards.

Bobby concludes, “I can’t believe I have the joy of making, shaping, and designing any board I want. I’m blessed with awesome customers who are mostly riders and paddlers.” “I get tingles up my spine when someone can pick any board they want in the world to ride, and they pick one of mine.”

Do you have an experience to share from Bobby Arzadon's Sup Shop or Boards?