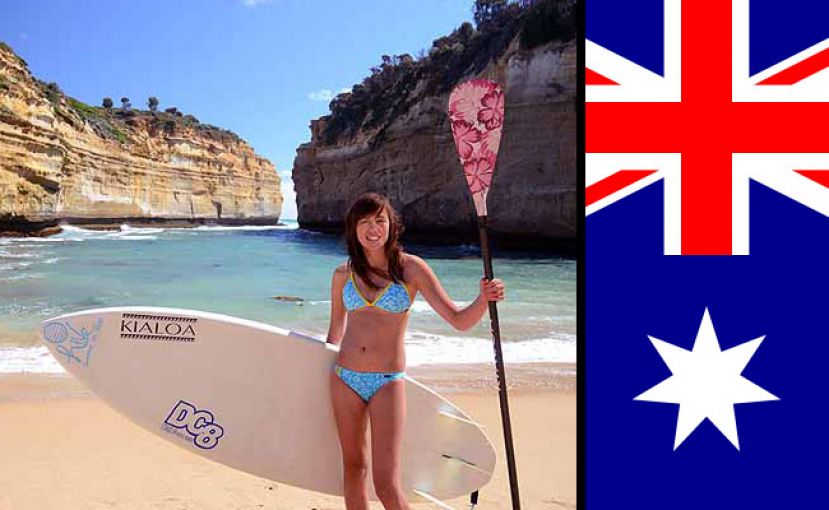 Kristi Page posing with a bikini line of a sponsors(left) and the trademark colors of the Australian flag. Photo: Phillip Page

It was the spring of 2009 and a young girl named Kristi Page entered into the women’s division of her first real competition as an unknown skinny kid of 13. Nobody knew who she was or where she came from. But after competing for the four days and coming out with 3rd in the Open Women’s division and “Best Up and Coming Talent award”, it became clear she had some real potential.

MERIMBULA, New South Wales, Australia – It was the spring of 2009 and a young girl named Kristi Page entered into the women’s division of her first real competition as an unknown skinny kid of 13. Nobody knew who she was or where she came from. But after competing for the four days and coming out with 3rd in the Open Women’s division and “Best Up and Coming Talent award”, it became clear she had some real potential in the fast-growing sport of Stand Up Paddling. (Become friends with Kristi Page.)

Born and bred an Aussie but from Swedish and Vietnamese heritage, Kristi was brought up not far away from the Central Business District (CBD) of Melbourne. As a kid she wasn’t particularly interested in sports with the exception of precision drill marching and the odd netball game. It was on a trip down the Victorian Surf Coast aged 9; she discovered her love for surfing and all things beach. Living two hours away from the waves, Kristi and her Dad, Phil, would travel 2 – 3 hours to the coast every weekend to surf whatever conditions the ocean provided.

After moving to the coast in late 2007, Kristi, her parents and two sisters now live in the town of Ocean Grove, on the Victorian Bellarine Peninsula. Longboarding for two or three years just didn’t do it, then Kristi was introduced to stand up paddling at a local competition. It was a few months before she really started to pick it up, but she hasn’t put her paddle down since. (Join the Sup Surfing Group.)

If you ask anybody who knows Kristi they’ll tell you, on land she’ll trip over her own feet and you could probably label her the clumsiest person you know, but in the water it’s a totally different story speed and grace take over.

Kristi says “One of the things I love most about SUP is how you have the ability to take on any medium, anywhere. Got a lake, a river, strong wind, surf or a concrete surface and you’re in business! It has to be one of the most versatile sports in the world, and I love all aspects of it! My favorite SUP discipline by far would have to be surfing.” (Signup to Supconnect Newsletter.)

Kristi is best known for her bubbly personality and deep passion for the water, if there are waves breaking she wants to be out there! Kristi keeps an open mind about everything, especially her surfing; when someone says “it can’t be done on SUP” that’s when the passion really kicks in and Kristi really wants to push the limits to make it happen. She’s determined to be the “best”, and she’ll do it her own way, some will call her crazy, others just plain unusual in her approach, but she doesn’t want to be known for being boring to say the least.

Kristi lives to go to competitions, meet new people and get to compete against Australia’s best. In particular the recent Wild Women’s Water Day run by Aussie champ Emma Webb was a real highlight. It was the first open women’s competition she won and it just had such a great vibe!” (Become friends with Kristi Page.)

What’s next for Kristi Page? She will continue to compete in surf comps and races around Australia, including a run on the Aussie SUP Titles this year at 15yrs of age. She aspires to be an Australian Champion and travel the world teaching SUP one day. The immediate goal is to be accepted into Sports Education Development Australia where she will qualify as a Surf / SUP Coach and go to University to study a degree in sport psychology and physiotherapy. Kristi would like to thank her sponsors: Sea Me Surf Photography, Kialoa Paddles Australia, Hive Swimwear, St Kilda SUP Bus SUP Lessons, Kahuna Creations Big Stick Street SUP & Hinano Tahiti Surf Wear, as well as her parents Phil and Kim Page and coaches Adam Robertson Elite Surf Coaching (SUP Surf) and Samantha Williams Canoe Sports (Race training). Without these peoples generous support she wouldn’t have made it this far.

What did you think about Kristi Page's story?