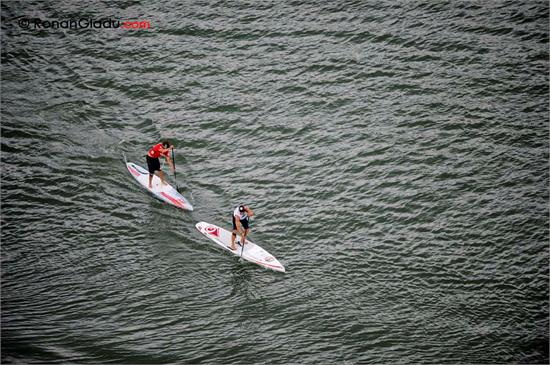 LA TORCHE, France - Amidst a highly competitive and international field of athletes, Eric Terrien once again read the conditions immaculately, to secure the win in not only the sprint race, but also overall at the first European stop in the Stand Up World Series.  Eric navigated the fast paced sprint course with skill and precision, fending off the ever dangerous Kai Lenny to cross the finish line first and match his phenomenal long distance result. Congratulations on a great result and a dominant performance from this leading European athlete.

Kai Lenny battled to the end, narrowly missing out on the win.  Kai dominated every heat he competed in until the final where he shot off the start like a bullet and lead the race through the first leg with Eric Terrien right on his heals.  However, Eric then accelerated past him but Kai managed to surf his way back into the lead again. Much to his dismay, Kai then ended up getting caught up around the inside buoy.  This allowed Eric to slip through the gap to take the win in the beach sprint race and also secure the overall win at Stand Up World Series stop 2.  Despite the dissapointment of not taking the win in the Beach Sprint Race at La Torche, Kai Lenny finished a very worthy second place.

Casper Steinfath did his country proud in France.  As the sole Danish representative at the La Torche Pro, Casper stepped up not only in the surf competition, having been awarded a well deserved wildcard, but also in the racing with a 4th place finish in the sprint race and a 3rd place in the long distance race.  Casper is certainly someone to look out for in the future and has proven himself as an exceptionally well rounded athlete.

La Torche local Greg Closier, completed the final 4 despite a dissappointing disqualification from the long distance race on Friday due to him missing the final mark.  He wasted no time in making up for the loss during the beach sprint race by battling his way through the pack and the eliminations to finish in an impressive 3rd place.  Unfortunately his lack of a result in the long distance race did not help his overall standings but he was able to demonstrate his abilities in front of an extremely enthusiastic crowd. He has certainly proven himself as someone to watch.

Mo Freitas caped off an incredible event with a 5th place finish.  After his 7th place result in the Stand Up World Tour surf event and 7th in the Stand Up World Series event, (with a 5th in the beach race and 12th in the long distance race), 14 year old Mo Freitas proved to be way beyond his years.  He continues to show that he can not only keep up with the champions of the sport, but also beat them. Without a doubt, this young phenom from Haleiwa on the North Shore of Oahu has a great future ahead of him.

Leonard Nika from Italy stood out at the La Torche Pro.  He showed the world that he is a force to be reckoned with by finishing in 5th place in the long distance race and 6th in the Beach Sprint elimination race.  This propelled him to 4th place overall for the Stand Up World Series event in France.  Leonard is certainly someone to look out for in 2012, as he represents Italy in the Stand Up World Championship Racing Series.

The women also stood strong in the Stand Up World Series component of the La Torche Pro Grand Slam.  They showcased that the talent and competition is every bit as intense with them as it is with the men.  With a dominating performance in both the City Long distance Race and the Beach Sprint slalom elimination race, Olivia Piana demonstrated her exceptional talent.  She had bullet wins in both just like Eric Terrien. This naturally means that she also secured the overall event win on this leg of the Stand Up World Series.  In second place, in both the City and Beach Race, was Faustine Merret who secured universal acclaim for a great performance.  Third in the City Race, and local to the region, was Caroline Angibaud who demonstrated that she is not only a phenomenal talent in surfing (with a win earlier this week in the women's division of the Stand Up World Tour), but also in distance racing.  Meanwhile, 3rd overall went to Patricia Hernanzez from Spain who was the 3rd place finisher in the Beach Sprint Race.  Congratulations to all the women.  This was an exciting taste of what is to come in terms of intense competition among the world's very best ladies.

The Beach Sprint elimination race provided a fitting and spectacular close to what was an epic World Series showdown at the La Torche Pro with Naish and Hoalen. Welcoming athletes from 16 different countries, the Stand Up World Series strengthened its mission of uniting a legitimate global world championship series through 2012, that will mature into 2013 and beyond.  The first stop in Europe brought together athletes from as far away as Australia, Hawaii, Brazil and Mexico, to as close as Pont l'Abbe for a completely unique event that tested racers' complete racing skill set and demonstrated that Europe is quickly becoming an immense hot-bed of stand up paddle talent.

Final Results from the 2012 Stand Up World Series, Stop 2:

Full results and video highlights will be available this week at www.latorchepro.com. Updated rankings will be available online at www.standupworldseries.com, so stay tuned.  In the meantime, here is a summary of the podium results:

After 2 events, Kai Lenny is currently leading the Stand Up World Series based off his results at stop 1 in Fiji and stop 2 here in France.

Coming up next in the Stand Up World Series are the following races: